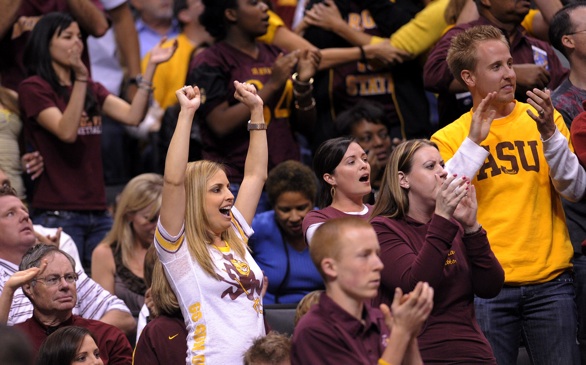 It was primarily about football, but as the accompanying chart indicates, there should be some concern about basketball as well.

In a men’s season that’s been entertaining — one in which half a dozen teams are popularly projected into the NCAA-tournament field — attendance is down at seven of the 12 schools, dramatically in several cases.

Five of those seven have seen drops from a year ago of 8 percent or more. Only one school (Utah) is up by double-digit percentage points, and four are off by 17 percent or more.

Inevitably, some of it has to do with the competitive state of those programs, but it’s clearly more than that, as fans wrestle with Wednesday- and Sunday-evening games and inconsistent starting times.

“The quality of the televised product is so damn good,” one administrator told me, “people are staying home.”

The attendance figures can be massaged to make it appear that the decrease is insignificant, but this much is fact: If each of the 12 schools were hosting a nonleague game this week, and drew exactly their 2013-14 average, the sum of those would be 5,073 fans fewer than the total of their averages (91,145) last season.

• The shortfall comes at a time when the league is considered superior to a year ago. This week’s RPI computer has seven teams in its top 55; a year ago, there were five.

• Arizona’s run as a No. 1 team until its first loss Feb. 1, one of the longest unbeaten starts in league history, no doubt kept the drop-off from being more pronounced. Arizona’s four conference games on the road yielded 63 percent higher attendance than the average of those four hosts.

• Even with a new coach and a more entertaining team, UCLA is off almost 18 percent, as the novelty from moving into renovated Pauley Pavilion last year has apparently dulled.

• Oregon State is more of a force on the floor than it has been since the mid-1990s — and it’s off by almost 18 percent.

• As much as any school, Oregon, down about 5 percent, faces some serious issues, ranging from donor burnout in Matthew Knight Arena (seats behind the benches cost $25,000 for a five-year right to buy tickets) to parking charges to the here-and-gone nature of its recent transfer-laden teams.

• By percentage, Washington and Washington State have the two biggest decreases in the league, the Cougars’ an alarming 41.2 percent. Meanwhile, the Huskies’ 20.1 percent loss follows two straight years of roughly 9 percent drops.

When the ADs met last week, they proposed to TV partners a relaxation of exclusivity windows in football. That would allow some scheduling flexibility and more fan-friendly starting times.

Big picture, it was the league presidents who once urged Commissioner Larry Scott to do what he could to make money. The hope had to be that there could be a balance struck between TV riches and the preservation of the live experience.

Where are the fans?

Attendance from last year to this: