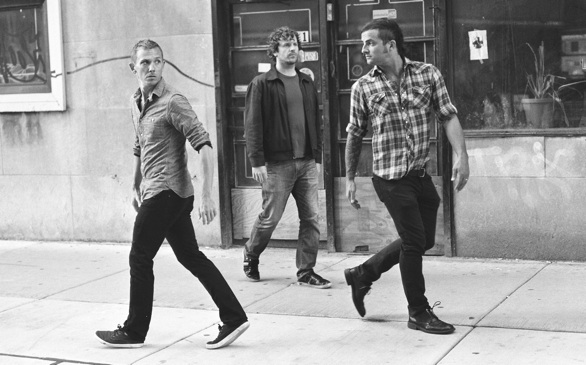 Chicago natives The Lawrence Arms are back from the dead with Metropole, their first album in eight years. The punk trio will be headlining a date at the El Rey Theater Sunday, Feb. 16.

Campus Circle sat down with bassist/vocalist Brendan Kelly to talk about the new album, Juggalos…and the most efficient way to sneak across the Mexican border.

Campus Circle: On a scale of one to 20 beers to stay warm, exactly how cold is Chicago this winter?
Brendan Kelly: Kinda depends on the time of day. If it’s before 4 p.m., you could probably get away with three or four. After that, you’re going to need at least twice that.

CC: What’s the story behind that sweet press photo? Chris [McCaughan] looks like James Bond.
BK: Chris gets that all the time. He gets Daniel Craig, and I get that asshole from “New Girl.” My buddy Ben has done most of the photography for us, and he sort or conceptualized that shot as sort of three dudes walking alone, down their separate paths.

CC: How’s the reaction been to the new album?
BK: We never wanted our first album in eight years to have people saying, “Oh, yeah it’s okay.” It seems to be either getting a nine out of 10 or a two out of 10, and that’s cool with me.

CC: You guys made one of the most entertaining videos of the year for "Seventeener (17th and 37th)". How did that go?
BK: Oh, it was so much fun; we had a blast. Everyone was so excited about the people we were spoofing. One of the parts that stand out in my mind from that shoot is that we were in the L.A. River where we shot it. So, our truck is parked remotely, and I'm looking like an Escape the Fate guy with the eyeliner and black shirt and blazer. And I’m walking alone, and I turn the corner, and there’s this group of huge cholos. And I’m like, “Oh man.”

CC: You’d be surprised how many dudes dress like that in Los Angeles.
BK: (laughs) Yeah, you’re probably right.

CC: Who was your favorite group to spoof?
BK: It had to be the Juggalos. You put on that makeup, and it’s like you’re not you anymore. I totally understand the allure of that after doing that. I look like a f**king dork, but it was really fun.

CC: I got to see your secret show at the Viper Room last March. You guys sounded way tighter than previous shows.
BK: Just in general (and I’m speaking for myself mostly because the other guys take things pretty seriously), over the past four or five years I’ve been focusing on being a professional on stage. Previously, it was always a bit of a party, but I want to put on a good show. We’ve gotten to a point where people actually want to see our band. When no one gave a sh*t, I just had a great time getting hammered and partying. But these days, I like to save the party for after the show.

CC: The El Rey is certainly a step up from The Viper Room. I remember seeing you at the Che Cafe in San Diego back in 2001. That’s pretty much a basement.
BK: That was a pretty legendary show. Remember who the headliner was for that show? It was Rise Against. So, that was a pretty fucking insane show. I missed Rise Against and got back just in time to play.

CC: Why were you late?
BK: I actually got stuck in Tijuana that day and had to use a BMX bike to get across the border to get back in time for the show.

CC: You can’t be serious.
BK: It was right after September 11, and the line to get across the border was like 2 miles long. I went down with Toby, our tour manager, and we were just dicking around -- drinking, being stupid -- and the line was so long. We were like, “F**k, we’re gonna miss the show.” A guy comes over and says, “You need to get over the border? I can rent you a bike, and you can drop it off at the Wendy’s on the other side.”

CC: How much does a rented bike across the border cost?
BK:  It was like 10 bucks each. So, we’re just peddling on BMX bikes through the lanes like we were in the Goonies or something...That was a crazy f**king day. I don’t remember the show at all, but I remember everything else.