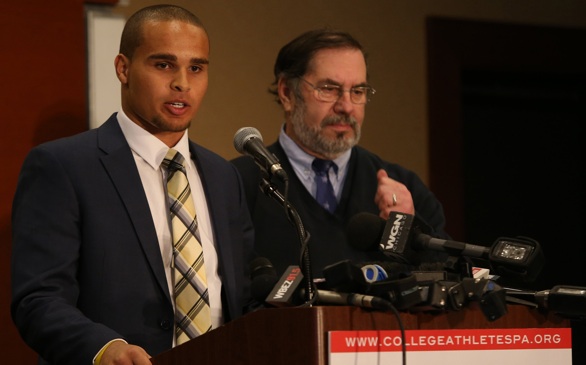 Are Northwestern University football players employees of the university?

That’s the main question the National Labor Relations Board must answer before the players petition to form a union can move forward.

On Wednesday, attorneys for both sides presented their case at the first in a number of hearings that will continue next week and will include testimony from a handful of players.

The athletes at Northwestern filed a union election petition with the NLRB on January 28, the first time in the history of college sports that a group of players have sought union protection. The petition is the first step in the union certification process. The NLRB is the federal agency that protects the rights of employees in the private sector, and Northwestern is a private institution.

Alex Barbour, an attorney representing Northwestern, said athletes are students, not employees. At the heart of his argument was an 2004 case in which the NLRB ruled that graduate students seeking to unionize at Brown University were not employees. The NLRB said then that graduate assistants are primarily students and have a primarily educational, not economic, relationship with the university.

John Adam, an attorney representing the athletes, said the athletes’ role as football players is separate from their role as students. Adam said the university controls the athletes on and off the field, generates huge revenues from their work and pays them in the form of scholarships or grants.

“There is no connection between football and their academic degree,” Adam said.