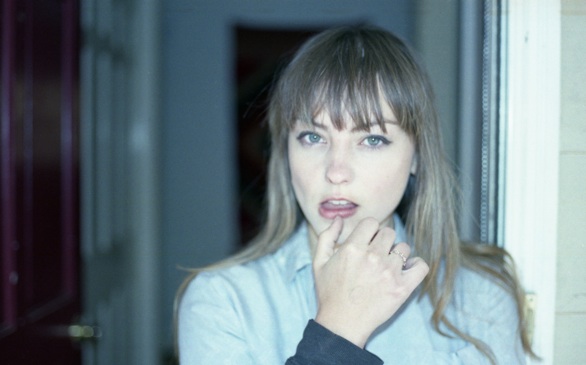 ANGEL OLSEN OFFERS A “HI-FIVE”
Alt pop artist Angel Olsen has released a video for “Hi-Five,” a tune that’ll appear on Burn Your Fire for No Witness, her new album for Jagjaguwar that’s scheduled to drop on Feb. 18. Olsen isn’t in much of a celebratory mood when she raises her hand for the high five in the video. Instead, she’s commiserating with someone who is lonely, just like the character she portrays in the video. Directed by Olsen’s frequent collaborator Zia Anger, the video is meant to recall typical appearances by female pop stars on a ’60s TV show. “They were always so wild and psychedelic and humorous from afar,” says Anger. “The more you watch them, the more wooden and awkward the performances become. There’s a certain loneliness captured and the song ‘Hi-Five’ seems to contain the same sort of duality.” Olsen certainly is not lonely in real life; she’s on a headlining tour for the next three months that includes a stop at the Echoplex on March 2.

BLONDE REDHEAD WILL HEADLINE DESERT DAZE FESTIVAL
This year’s Desert Daze Festival takes place April 26 at the Sunset Ranch Oasis in Mecca and will feature shows by Blonde Redhead, The Raveonettes, Liars, Autolux, Unknown Mortal Orchestra, Vincent Gallo and many others. Sunset Ranch Oasis has 50 acres of fresh water lakes, so you can waterski, wakeboard or fish in addition to catching performances by Allah-Las, Deap Valley, Kiev, Froth, Fever the Ghost, Cosmonauts, Mr. Elevator & the Brain Hotel, Church of Sun and more. Mecca is located just outside of Indio, about a 2 ½-hour drive from Los Angeles. For the full line-up and ticket info, visit www.desertdaze.org

BOY GEORGE IS BACK
Former Culture Club front man Boy George has announced a March 25 release date for This is What I Do, his first full-length studio album in 18 years. Guests appearing on the album include DJ Yoda; Kitty Durham of homey British blues rock trio Kitty Daisy & Lewi; guitarist Ally McErlaine from the band Texas; MC Spree of Dreadzone; and singer virtuoso Nizar Al Issa. “I wanted to make a baggy album, not overproduced and I think I have achieved it,” says George. “I was listening to things like ‘Beast of Burden’ by The Stones, and I had my head definitely in the ’70s. I was also writing from a happy place. This time, no ex-lovers to get revenge on.” Tour dates will be announced closer to the album release date.

FREE SAMPLER FROM THE END RECORDS
Brooklyn-based The End Records has released a free 17-track sampler featuring cuts from upcoming releases and favorites from 2013. Among the songs exclusive to the sampler are an alternate version of “One Road Hill” by Rich Robinson of the Black Crowes and radio edits of “Animal Heart” by Nina Persson (The Cardigans) and “Slo Light” by Davidge (Massive Attack) with Stephonik Youth. Among the other tracks are contributions from Sponge, The Mission, The Candles, Cage the Gods, Dead Letter Circus, American Sharks, The Dandy Warhols and Okta Logue. The free download is available at Amazon.

JOHN ZIPPERER LIVE AT THE LIBRARY
Los Angeles-based Americana singer-songwriter John Zipperer will play a CD release show March 1 at the Thousand Oaks Library as part of the venue’s “Live at the Library” concert series. Zipperer will be playing cuts from Full Circle, set to drop on Feb. 25, and the concert will be a very relaxed affair that’ll include a potluck coffee. Fans are encouraged to bring potluck items such as desserts and soft drinks. Admission is a suggested $20 donation that will go to Zipperer; beer and wine will be available for purchase with drink proceeds going to the Thousand Oaks Library Foundation. www.johnzipperer.com

ALL DOWNHILL FROM HERE
Henry Rollins, Evan Dando (Lemonheads, Blake Babies) and Ian Mackaye (Fugazi, Minor Threat) are all feature in the new book All Downhill From Here, a collection of interviews, reviews and reflections on the punk, hardcore and other heavy music scenes. The book’s material is culled from 10 years of content from webzine Scene Point Blank, a publication that evolved out of band AFI’s message board. Also interviewed in the tome are Larry Livermore, Rise Against, Tiger Army, Polar Bear Club, Thrice, Anti-Flag, Ted Leo, Frank Turner, Strike Anywhere and many others. All Downhill From Here is available in print, Kindle and eBook versions. www.scenepointblank.com/book