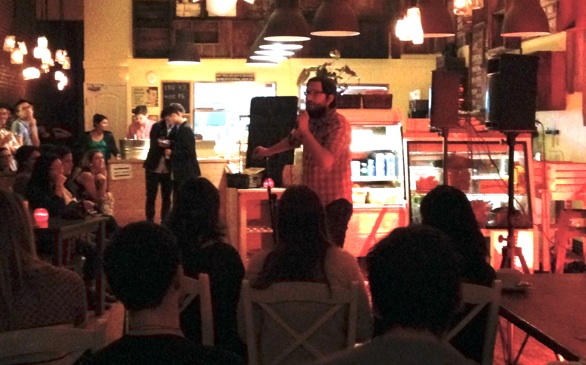 Combine creativity, ingenuity and a sense of humor, and what you’ve got is this week’s Prom Night comedy show at Nature’s Brew.

While purchasing coffee, Harris Mayerson saw an opportunity to bring alternative comedy to this hub for USC's studious scholars with an appetite.

This Thursday, Mayerson and AJ Frydman were able to host their first-ever comedy show at this packed venue. Opening by launching condoms at the audience, these Trojans (no pun intended) were able to keep the attention of the crowd throughout the night with their witty rapport and fantastic comedic lineup.

While Prom Night featured the talents of fellow Trojans Hanna Dickinson and alumni Nick Rutherfod, other comedians from the Los Angeles area such as Jake Weisman and Chase Bernstein were also present.  Simultaneously supporting the Trojan family and exposing audience members to new, hilarious comedians, Mayerson and Frydman were able to make comedy a more accessible entertainment option for 'SC students.

This week’s performance was initially a test run; however, thanks to the generosity of Nature’s Brew, the show will be put on again in future weeks.

For those interested in a change of pace on their Thursday nights, come and indulge in stand-up comedy and $3 PBRs.

Donations are welcome at the door.