UCLA's Mazzone Not Happy with Proposal Designed to Slow Down Offenses 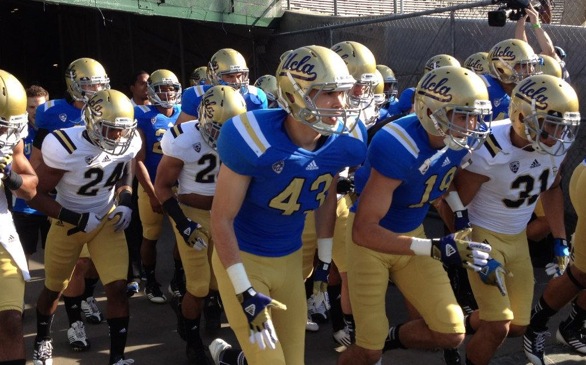 UCLA offensive coordinator Noel Mazzone was perplexed, and more than a little miffed, about a rule change proposal designed to slow down tempo offenses.

The proposal would prevent teams from snapping the ball for the first 10 seconds of the 40-second play clock. It would also allow defenses to substitute even if the offense does not change players.

The proposal goes to the NCAA rules oversight committee and will be put to a vote on March 6.

"Why don't we just do away with the play clock and wait for the defense to say they're ready?" Mazzone said. "We could have the quarterback go over to the other team's sideline and ask if it's OK to snap the ball."

Proponents of the rule, including Alabama Coach Nick Saban and Arkansas Coach Bret Bielema, said they have concerns about safety, claiming that up-tempo offenses put players at risk.

Saban and Bielema are not on the NCAA committee that recommended the proposal, but both addressed the committee.

Rogers Redding, the NCAA coordinator of officials, told the Associated Press that Bielema was representing the American Football Coaches Assn. and that Saban asked to speak with the committee.

"It's not routine, but it's not unique, either," Redding said.

Alabama and Arkansas run more methodical offenses. Saban has expressed concern whether the growth in the number of teams using up-tempo is good for college football.

"Show me the research that says up-tempo offenses increase the chances of injury," Mazzone said. "I don't understand why they need to change something that is not a problem."

The proposal will be in a comment period, in which coaches can electronically submit their opinions to the NCAA. The issue appears to be divided along philosophical lines, whether a team runs up-tempo or not.

Mazzone was not the only who felt this was more a competitive than a safety issue.

"It's like asking a blitzing linebacker to raise his hand," Gundy posted on his Twitter.com site Thursday.

UCLA ran 958 plays last season, the 34th most among FBS teams. The Bruins were 20th nationally in scoring, averaging 36.9 points per game.

UCLA has recruited athletes to play an up-tempo style.

Said Mazzone: "What are we going to do? Tell basketball teams that they can't shoot until the other team sets up its zone defense?"

Football
NFC preview: How the Eagles stack up against the rest of the conference
973 views