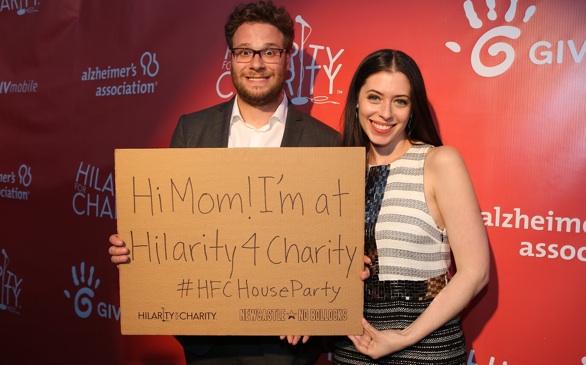 Seth Rogen and his wife, Lauren Miller, are encouraging all colleges to help raise awareness.

Funny man Seth Rogen (This Is the End, Knocked Up) and wife Lauren Miller have announced a nationwide collegiate program as part of their Hilarity for Charity (HFC) organization: HFC U.

HFC is a unique movement that uses the power of laughter to bring attention to Alzheimer's disease.

Now, with HFC U, Rogen and his wife are encouraging college students to help raise awareness and funds for the Alzheimer's Association.

Here's how it works: For three months, HFC will provide promotional assets, support and structure for student organizations (fraternities, sororities, athletic groups and leadership groups) to host their very own HFC U event.

The prize? The university that raises the most funds from now until April 11 will win a special advance screening of Rogen's upcoming film, Neighbors, which also stars Zac Efron and Rose Byrne. There will also be a Q&A to follow the screening.

Soon after this announcement, Rogen chatted with Campus Circle about bringing awareness and his connection to Alzheimer's.

I saw that your wife Lauren wrote an account on the Hilarity for Charity website regarding her experience with her mother’s Alzheimer’s disease. How has that personal connection affected you and encouraged you both to invest your time in the charity?
It has affected me a lot; it has just been horrible. It has also been very educational just as far as what the disease is like. My perception of it wasn’t just of an old person who doesn’t know where their keys are, but of a woman in her 60's who can’t walk, eat or speak on her own. It’s a very helpless disease in a lot of ways. There are no cures or treatments, and it kind of puts you in this position of really feeling hopeless. I think that’s what inspired us to really use the charity because it felt like we were reclaiming some control over a situation that we would otherwise have no control over.

Looking towards the future, we’re trying to get people involved, trying to make it a disease that gets more funding and trying to make it so people talk about it more. We’re putting it out as something that people need to pay attention to, while at the same time raising money for a fund that provides experienced caretakers.

On the website, I saw that Mindy Kaling made a guest appearance at a particular Hilarity for Charity show. What specific events does your charity host?
We’ve done two big comedy/music events, and we’re doing a smaller New York event this year, too. We also have our annual L.A. event that’ll probably be in the fall. We’ve started this program (HFC U) in order to get other people to put on their own events as well.

From looking at the website, you seem to have a great group of comedians and actors working alongside you. I also saw that the shows you put on are directed more towards a younger audience. However, have you ever thought about putting on shows for people directly affected by Alzheimer’s?
The whole reason of why we have an event in L.A. and New York for a slightly older group is because these are the people you’d actually be dealing with and that’s what really inspired us to start this fundraiser in the first place. However, in order to actually do something, you have to get younger people involved. It was a reaction to the fact that there were only events for those who were closer to the age of people who were being affected and not something that engaged younger people who might one day have to actually deal with it.

Do you donate the charity’s earnings – I saw that you raised about $500,000 in the past year – to various hospitals and associations, or do you tend to focus on a particular one?
We made almost a million dollars over the past two years from having this event. We started a fund where we’re going to give out the money that we earned to provide caretakers for people who need them.

It’s our own entire fund; we literally will give out the money ourselves to various people who need caretakers. We’re talking about giving it to a caretaking company that will provide caretakers to those who need it, but the goal is that we’ll be in as much control as possible regarding the specifics as to where the money is going, just so it’s not going to a research program – which does get a lot of money from the Alzheimer’s Association itself. We’ve just found that one of the only reasons that Lauren’s father’s life and our lives are more manageable is that we’re lucky enough to be able to afford caretakers. If we couldn’t, then that’d be completely derailing everyone’s day-to-day life. We’ve recognized that this has helped us, therefore making us want to help other people.

Turning away from the main point for a moment, the name “Hilarity for Charity” is eye-catching and it’s really great that you’re using your comedic side to help people in need. Have you always had this humorous side, or did it adapt over time (from watching comedies, etc.)?
I think I’ve always been into comedy since I was a kid. I would be described as the annoying kid who was always trying to be funny all the time.

And lastly, do you have any advice for someone whose loved one suffers from Alzheimer’s?
I would say getting involved in some sort of charity or some sort of activity that makes you feel like you’re doing something that could lead to a potential cure for this disease is great. It has been very helpful to us, as we’ve found comfort in knowing that with a situation that you can’t do much about, we’re actually doing something that proves to be helpful.

To learn more about HFC U and how to get involved, please visit hilarityforcharity.org/hfcu.