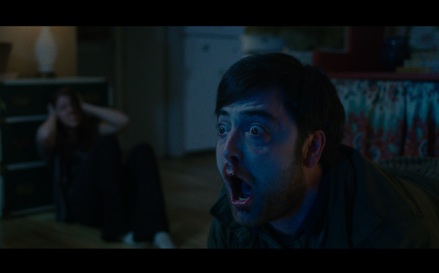 Usually when a character gets abducted by aliens in films, we never expect to see him or her again. But that's not the case in director Joe Begos' Almost Human.

In the film, Mark vanishes in a flash of blue light. His best friend, Seth, believes he was abducted by aliens. Two years later a string of grisly, violent murders occurs, causing Seth to believe Mark has returned...with something very evil inside of him.

Begos, a Rhode Island native who worked under horror legend Stuart Gordon (1985's Re-Animator), told Campus Circle about making a slasher film, working with a low budget and the possibility of an Almost Human sequel.

It's easy for slasher films to be structurally identical, and as a result many become unmemorable. What sets Almost Human apart from other slashers?
I completely agree regarding how many of them are essentially the same blueprint and don't fare very much from each other. I've always wanted to make a slasher, being such a horror fan, and it's hard to escape the feeling of how generic your film may or may not end up being. I've always had a fascination with alien abductions and always wanted to make some sort of badass alien abduction film. Knowing that, I always thought the best route would be to have this ridiculous abduction sequence in the opening scene and then deal with there aftermath. Most movies build and build towards a third act abduction, and that's not something I wanted to do. When trying to figure out what would be the coolest way to deal with somebody coming back who isn't human, it clicked for me that this would be the perfect framework for a slasher that had a different hook than most.

Did you find that there are certain advantages to working with a low budget? How or how not so in Almost Human?
It seems like the biggest advantage is that we had absolutely ZERO people looking over our shoulder. Every decision was mine. Didn't need to ask anybody else. Didn't need notes on the cut. I'm starting to learn as I wade my way farther and farther into "Hollywood," that that's very rare. Also a reason: I'm now starting to think f*ck it -- I should just do that again. I don't need the additional stress to pile on top of the mountain of stress that already occurs when making a movie.

What filmmakers working today are catching your eye?
On the indie front, I think we have some interesting filmmakers coming up for sure. I'm a big fan of Jeremy Gardener and what he did for essentially no money with The Battery, very interested to see his follow up. I dug Mickey Keating's short and simple Ritual, which again is a movie done for no money. [He's] a filmmaker who definitely understands filmmaking on all levels, and [I] can't wait to see what he does with a bit more cash.

On the bigger front, my favorite working genre filmmaker is Alex Aja for sure. Haute Tension is the epitome of great f*cking horror to me. Brutal, tension that makes your palms sweat, it looks and sounds gorgeous, and simple as hell. I'm a big fan Alexandre Bustillo and Julien Maury, who completely knocked me on my ass with Inside. Gaspar Noe is pushing the boundaries of story and technical virtuoso with each new film he makes.

Almost Human definitely nods to certain tropes of zombie movies. Did you approach Mark's character like a quasi zombie?
I didn't approach it so much as a zombie, rather than a super human (which I guess in turn would have some qualities of a zombie). I had a couple of scenes in the original script where certain wounds that Mark had would self heal, but unfortunately our budget would not allow such a thing.

Your characters' stories are definitely resolved, but the story technically isn't over. Do you have any intention of making a sequel?
I would like to make a sequel at some point. I have an awesome idea for a sequel, in which we would have the once thought to be dead lead of this film wakes up in the morgue, the slug now in him, as he infects all of the cadavers around him, turning it into an Aliens-style base where it's an enormous array of cocoons ready to burst. Think Halloween 2 meets Aliens.

*Cooper Copeland contributed to this story.

Arena Cinema will host a Q&A with Director Joe Begos and the Almost Human cast from Friday, Feb. 21 to Sunday, Feb. 23! Click here for tickets.

Interviews
'Crazy Rich Asians' made Henry Golding a star. Now he's showing Hollywood everything he can do
518 views

Interviews
Mary McNamara: After losing a child, 'Pieces of a Woman' filmmakers channeled their grief into art
552 views