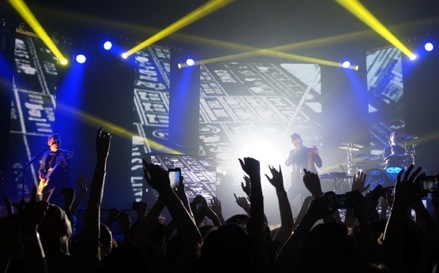 Panic! at the Disco lit up the Wiltern stage.
(Credit: Laura Koeller)

I wouldn’t have expected Panic! at the Disco to be a band with staying power, but its Sunday night show at the Wiltern proved it had just that.

The sold-out show was populated primarily by 16-year-old girls. The fans in the incredibly long line for merchandise would have been just starting grade school when the band’s 2005 debuted, proving the group has been discovered by a whole new generation that doesn’t just think of them as Fall Out Boy’s protégés.

Panic! at the Disco's concerts are consistently marked with a high level of showmanship, and this tour did not disappoint.

Brendon Urie started the show wearing leather pants and a metallic jacket, a look that clearly spoke to his hometown of Vegas. They had all the lights, theatricality and overt sexuality required of Sin City, which was embodied in the band's performance of “Lying is the Most Fun a Girl Can Have Without Taking Her Clothes Off." It certainly got the teen (and older) hearts beating faster!

Urie flung himself into every note, and the audience, who knew the words to every song, responded in kind. The enthusiasm led Urie to drip with sweat by the middle of the second song, causing him to forgo his jacket in favor of a bare torso by the encore performance of “Girls/Girls/Boys” off the most recent album Too Weird to Live to Rare to Die! This showman-like move, and his uncanny ability to hit the highest of notes, earned him a mic-stand full of bras.

Though the band has gone through numerous lineup changes over the years, the raw energy of its live shows has been unwavering. Panic! at the Disco certainly aimed to put on a show, and it managed to do just that.