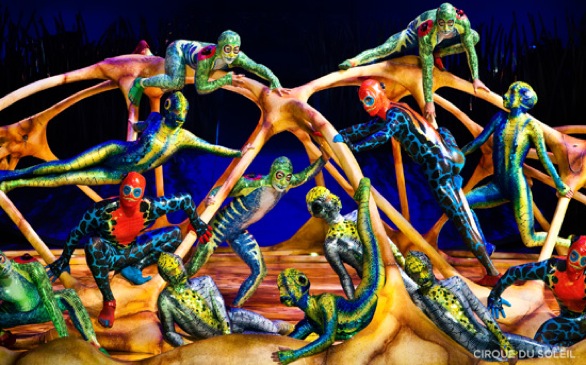 Every Cirque du Soleil show is different. Yes, each one has lively characters, thrilling acrobatic performances and beautiful, colorful costumes. However, "TOTEM" at the Santa Monica Pier is one of a kind.

With themes such as evolution and nature, "TOTEM" features characters and acrobats portraying man’s evolution and connection to animals. According to its website, the show “traces the fascinating journey of the human species from its original amphibian state to its ultimate desire to fly.” It is truly a breathtaking story of how man is connected to nature, balancing both science and legend.

Like at every other Cirque du Soleil show, the acrobatics promise to be impressive. Foot juggling, rings, hand balancing, trapeze, unicycles, Russian bars, hoop dancers and more – "TOTEM" will have you on the edge of your seats, mesmerized by these performers’ graceful yet daredevil movements.

Apart from their skills, you will marvel at the performers’ costumes. Designer Kym Barrett really went above and beyond in making sure the costumes accurately portray real animals, evolution and cycles of the seasons. Quite simply, she makes the human body look good.

Performers are dressed to resemble creatures such as frogs and fish, and even elements such as crystals. Neon greens, purples and blues pop on stage. Some acrobats wear the traditional elements of Native Americans, while others wear dazzling pieces that literally shine and sparkle. For example, The Crystal Man’s (an acrobat character that appears early on in the show and closes it) costume contains about 4,500 crystals and mirrors that reflect magnificently on stage!

Speaking of the stage, it is in the shape of a turtle, which is a symbol for the origin of life in many ancient civilizations. Representing Earth and carrying the entire weight of the world on its shell, the turtle is the core of the show. See if you can figure out the other motifs embedded within the stage such as hand-drawn images, the scorpion bridge and the Indian carpet.

Whether you are going with your buddies, a significant other or by yourself, you will without a doubt have a magical experience at Cirque du Soleil’s “TOTEM” show.