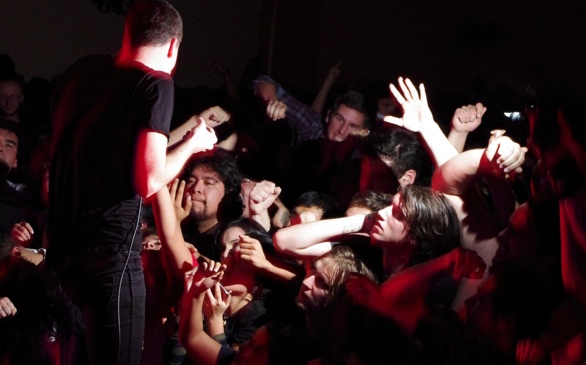 A Friday night, Valentine’s Day concert set inside one of L.A.’s newest and strangest concert venues can make anyone’s Hallmark day a success.

Nestled just off the 101 near Los Angeles City College, the Ukrainian Cultural Center is pretty much the precise mental image those three words conjure. The interior is a cross between a church and a banquet hall, with old fixtures and a strangely familiar vibe. During the first 30 minutes of the show, I kept expecting to hear the sound of dishes breaking and a man hoisted in a chair to come dancing around. Neither appeared.

But with a lineup like this, who’s to complain? The return of local heroes Touché Amoré brought fans out in droves, selling out the concert and packing the larger-than-expected hall to the brim. Few underground bands have as rabid of a fanbase as Touché Amoré, and said crowd would make themselves known throughout the band's high-energy, passionate performance.

Opening buzz band Seahaven certainly gained some fans with its unorthodox rock that sounded like Alt-J on a weed brownie. The band switched moods with ease, transitioning from relaxing and soothing to loud and angry at the drop of a guitar pick. The band members appeared young but possessed a mature sound that was very much their own thing.

mewithoutYou were veritable elders in comparison to Seahaven. The band has been around for nearly 15 years and remains as difficult to summarize as ever. Part folk, part spoken word and part post-hardcore, mewithoutYou is the epitome of weird. Lead singer Aaron Weiss looked the part of a Silver Lake hipster with a gruff beard and what appeared to be at least one costume change throughout the band's almost hour-long set.

The crowd’s appeared collective average age of around 20 didn’t help the environment for mewithoutYou's performance, something that didn’t appear to faze Weiss. He danced around, screaming, singing and generally fulfilling the colorful character that he appears on the band's recorded albums. He even busted out an accordion in what would make for some interesting small talk in the smoking area after their performance.

Fresh off the heels of album Is Survived By, L.A. natives Touché Amoré wasted no time jump-starting the crowd with its acclaimed brand of post-hardcore. The band is really something else live, with lead singer Jeremy Bolm working the crowd with a feverish energy that only the best front men possess. The Valentine’s Day atmosphere worked well with the band’s (at times) hyper emo lyrics, and there were certainly many sing-a-long moments from the well-versed crowd.

And that crowd didn’t stand still either. The stage was a revolving door of crowd surfers and stage divers, which did much to amplify the energy in this bizarre Ukrainian hall.

The set finished with a bipolar juxtaposition of the hard energy of “Honest Sleep” and the slow piano build of “Condolences” before ending rather abruptly around 11.

With the sweet smell of bacon-wrapped hot dogs greeting everyone at the exit, the crowd spilled out onto Melrose Avenue with another kind of love on their minds this past Valentine’s Day.