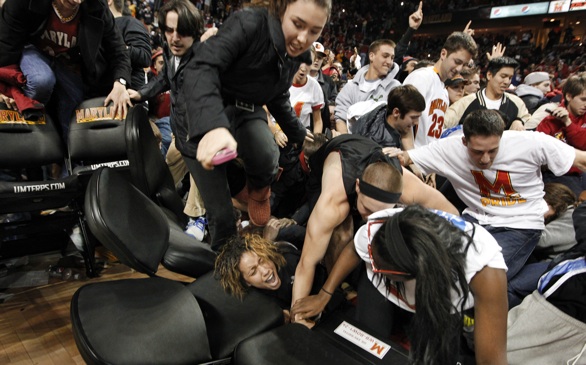 A student gets trapped under chairs as a tidal wave of Maryland fans rush the court in 2013.
(Credit: Chuck Liddy/Raleigh News & Observer/MCT)

They did it twice Friday, after a 69-66 double-overtime victory over Arizona, then ranked second. Sun Devils fans charged the court with one second left and after the final horn.

The situation brought safety concerns from the coaches involved.

“In the aftermath, I’m sure conference officials will take a long look on how to improve it,” Arizona Coach Sean Miller said.

Arizona players also had to wade through fans after losing at California. Bears’ fans also ran onto the court prematurely that night.

“We obviously lost two games this year and the court was rushed four times in those two games,” Miller said. “That’s all part of it. Everyone gets really excited. I don’t want to take anything away from the victories by Arizona State and Cal. They had players make huge plays, their coaching staffs worked really hard and they were the better teams those nights.”

"It's longstanding tradition in college basketball for students to storm the court after the home team has big wins,” Arizona State Coach Herb Sendek said. “You can certainly foresee possible danger in that.”

Sun Devils’ fans spilled onto the court after a Jahii Carson dunk with one second left. The court had to be cleared and Arizona State fans had to hold their breath as a three-pointer by Arizona’s Nick Johnson bounced off the rim.

“It really was a blur, you’re talking about a matter of a second or less than a second,” Sendek said. “When Jahii scored, I thought the game was over, and I think a lot people did. Sean and I talked at halfcourt, shook hands. It became apparent that clock had not expired.”

As to what could be done to prevent these situations, Sendek said, “To an extent that security can prevent it, that would probably be a good thing. The administration would have to weigh the cost to fund that and make decisions at the conference level. Any time a group of people are rushing in close quarters like that, there is some risk involved.”