Fans May Strike Out in Battle Over Dodgers' New TV Home 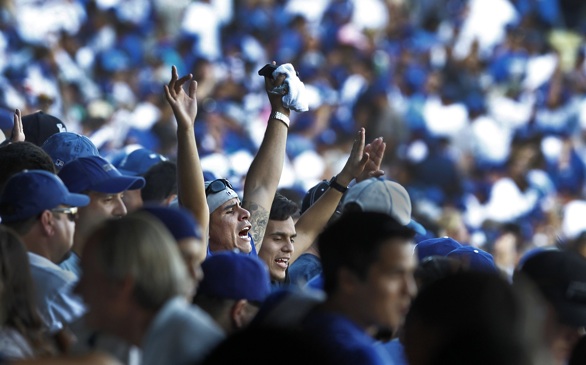 Clayton Kershaw's arm and Yasiel Puig's antics aren't the only things Dodgers fans will be worrying about come opening day.

Hundreds of thousands could miss out on watching their team on television this season because of a skirmish between its new TV home and local pay-TV distributors.

Set to debut Feb. 25, SportsNet LA, which is owned by the Dodgers and run by Time Warner Cable, has yet to sign agreements that would make it available in the majority of Los Angeles pay-TV homes.

Now, for the first time in the team's history, none of the team's games will be available on free, over-the-air television. Fans will have to subscribe to a pay-TV service if they want to watch the Dodgers.

Time Warner Cable agreed to an $8.35-billion, 25-year deal to run SportsNet LA, according to a valuation by the Dodgers and Major League Baseball. The annual fee that Time Warner Cable will pay to the Dodgers starts at $210 million this season and rises dramatically through the life of the contract.

Last year, KCAL and Prime Ticket paid a total of about $50 million for Dodgers' rights.

For Time Warner Cable's deal to be a success, it needs to get wide distribution for the channel — and at a high price. That will ultimately mean bigger bills for consumers, whether they are baseball fans or not.

The cable operator is optimistic that it will have wide distribution by the time the Dodgers' regular season starts March 22.

But that may be wishful thinking.

Many distributors are upset about being pressured to carry a new sports network in a region that already has several similar channels, including not only Prime Ticket but also Fox Sports West, Pac-12 Los Angeles and Time Warner Cable's SportsNet and Deportes.

"It is really hard to understand why everyone needs their own channel when they didn't need one before," said Andy Albert, senior vice president of content acquisition for Cox Communications.

Those channels, along with ESPN, cost customers as much as $20 a month whether they watch them or not. The Dodgers channel threatens to dramatically increase that figure.

"Time Warner Cable has unilaterally decided to pay an unprecedented high price and now wants all of their own customers as well as those of their competitors, none of which who had any say in the matter, to pick up that tab," said Dan York, DirecTV's chief content officer.

Neither the Dodgers nor Time Warner Cable would name the amount that distributors must pay to carry SportsNet LA. Rone denied speculation that the initial asking price was greater than $5 a subscriber per month but wouldn't elaborate.

Some distributors have indicated that they would carry SportsNet LA if they could offer it on an "a la carte" basis to customers willing to pay extra for Dodgers programming.

"Given the high price that Time Warner Cable is seeking, it would be reasonable to ask that only those families who truly want to pay for the Dodgers actually pay for it," said DirecTV's York, whose company has 1.2 million subscribers in the region.

SportsNet LA's response: A la carte is "not really on the table," Rone said.

Stan Kasten, the Dodgers president and chief executive, said the team wanted its own outlet because "it best serves our fans" and promised that it will be "a Cadillac of regional sports networks."

In addition to games, SportsNet LA will feature news shows about the team and its players and make use of the Dodgers library for historical programs.

"It's 24-7 content about the Dodgers by and for the Dodgers," Kasten said. "We know there is a market for as much content as we can provide."

"Someone may think that is material, someone else may not," AT&T U-Verse Vice President of Content Chris Lauricella said of the programming plans for the channel when games are not on. U-Verse has more than 300,000 subscribers in the Los Angeles area.

Rone is hoping that fan demand will pressure DirecTV, Cox and other carriers to sign deals. The website for SportsNet LA welcomes visitors with a page that says, "Demand Your Dodgers Now" and offers fans a form letter to write to their providers. Billboards for the channel are also popping up all over town.

If the distributors don't respond, it won't hurt the Dodgers' bottom line. A condition of the deal, according to people familiar with the transaction, is that Time Warner Cable has to cover the subscription fees for any distributor that does not sign on to carry the network. Rone and Kasten declined to comment on the terms of the agreement.

Last week's $45-billion announced acquisition of Time Warner Cable by the massive Comcast Corp. could provide Rone with more leverage with distributors. Comcast has regional sports networks around the country, which gives it lots of cards to play in negotiations with distributors.

But Comcast has had its own struggles in the sports arena. A Houston sports network it co-owns recently filed for bankruptcy after being unable to strike distribution deals.

As for subscribers, they can vote with their wallet if they're willing to miss the Dodgers altogether.

"Consumers can either absorb it or quit the system and go to Netflix and buy an antenna," media analyst Rich Greenfield of BTIG Research said.