Babysitting Blues: Camilla Belle Accepts Her Toughest Role Yet in When a Stranger Calls 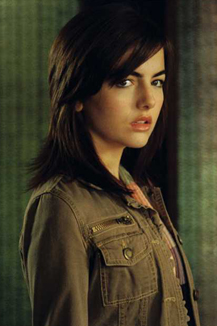 Only 19-years-old, actress Camilla Belle has already shared the silver screen with such modern day Hollywood legends as Mel Gibson, Daniel Day-Lewis, Glenn Close and Nicole Kidman. Most recently seen in the independent films The Chumscrubber and The Ballad of Jack and Rose – for which Belle received a Gotham Award nomination for breakthrough performance – the talented young actress is doing something truly unique with her career. While most teen actors are struggling to find creative, award-worthy scripts and break free of the popcorn flick genre, Belle is doing just the opposite with her latest film, When a Stranger Calls.

A retelling of the classic 1978 thriller of the same name, When a Stranger Calls features Belle in the role made famous by Carol Kane as a babysitter who is tormented by a series of ominous phone calls asking her over and over again, "Have you checked the children?" Although hailed as one of the greatest physiological thrillers of all time, it’s definitely a departure from the roles Belle is typically associated with. However, for Belle it’s a welcome change of pace.

"The project definitely appealed to me because with independent films you often find great scripts, but at the same time it’s frustrating to make a movie most people are unaware of," Belle states. "It’s nice to know that my friends can see the trailers [for When a Stranger Calls] on TV. At the same time, though, I didn’t want to be a part of something I would be ashamed of later on in life. I’m not a big horror fan, so at first I didn’t want to sign on. But then I realized this wasn’t just a horror a movie – it was a physiological thriller, and the type of classy thriller I would want to see."

With only a house and a series of phone calls to react to, Belle quickly discovered that this mainstream popcorn flick would become one of her greatest onscreen challenges yet. Unlike her other features, Belle didn’t have the opportunity to feed off her co-stars since they were inanimate objects. Although she could have easily turned to the original feature to get a feel for how Kane handled being in the same situation, Belle purposely avoided seeing the movie once being cast so as "not to compare herself to Carol." Instead, the actress worked on creeping herself out between takes to keep her level of adrenaline up.

"I would wait until the cast and crew were downstairs and all the lights were shut off upstairs and then walk around in the dark cold," she says. "The house had all these endless dark hallways, too, so it was pretty easy to get spooked on my own."

Besides being emotionally draining, When a Stranger Calls also required Belle to partake in some physical training since the character she plays, Jill, is supposed to be a sprinter. Belle laughs that she obviously "doesn’t have an athletes body," so she worked with a coach on the studio lot to bulk up for the role.

"I dance, so this was a brand new world to me," she states. "I would run on the track for over an hour, do all these drills, some weight training … it was pretty vigorous. But soon my pants began to fill with all this muscle mass – I felt like a machine. It was insane, but a lot of fun."

While the success of Stranger could open a whole new set of doors for Belle in the business, the recent high school graduate admits she would like to take a break from Hollywood in the near future so that she can go to college. However, Belle’s been working in this industry long enough to know to accept whatever opportunities come her way, and she’s waiting to see how Stranger performs at the box office before starting on any college entrance essays.

"I went to the type of high school where it’s all about going to college, so it’s just a matter of when not if," she states. "I would love to go this fall, though, I’m just waiting to see what happens."

In the meantime, there’s one thing that’s for certain – you can count Belle out of any babysitting jobs in the near future.

"I’ve never babysat before, so I had to rely on my friends’ stories about misbehaving children for this role," Belle says with a laugh. "But after this film, I don’t think I ever will."