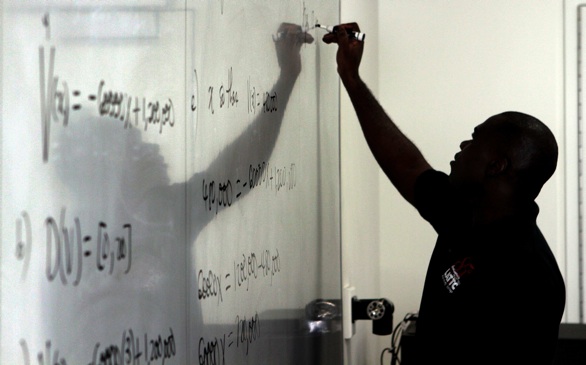 California's community college students could soon stay put -- and pay a lot less -- to earn what they thought they would have to go elsewhere to get: a four-year bachelor's degree.

As the demand for college graduates grows, many states are turning to their two-year schools for help -- and California might do the same, allowing community colleges to offer four-year degrees that aren't readily available at nearby public universities.

"Now is the time to look at what innovations might be good for the state, and what might actually save us money in the long run," said state Sen. Marty Block, D-San Diego, whose Senate Bill 850 would authorize the change.

The startup would be small scale -- just one program per campus for a select few college districts.

The argument goes like this: Two-year associate degrees are becoming insufficient for some fields, such as nursing and respiratory therapy, but bachelor's degree programs in those areas are scarce. Expanding community college programs would help students complete a bachelor's degree quickly, without the hassle, the expense of transferring to another school and the dreaded delays.

Ruby Guzman waited three years to get into the Contra Costa College nursing program, and now -- on the cusp of an associate degree -- she is waiting again. She and classmates aspiring to transfer to a four-year program are on CSU East Bay's waiting list.

"It just feels like roadblock after roadblock," Guzman said.

"I'd just like to see California catch up with the rest of the nation," said Linda Thor, chancellor of the Foothill-De Anza Community College District, where programs are preparing for expansion. "Our students need this and deserve this, as do our employers."

But big questions remain about cost, tuition rates, faculty credentials and whether bachelor's degrees would divert community colleges from their mission as California's two-year steppingstone to four-year campuses or trade jobs. And both critics and advocates worry the state won't adequately fund the programs.

"That's always the million-dollar question, like are you going to pay for it?" said Aaron Bielenberg, president of the college system's student senate.

Previous bills have gone nowhere in the Legislature, but the state budget outlook has improved, and momentum is building, said Barry Russell, president of Las Positas College in Livermore and a former state vice chancellor.

"I think it's an inevitable move that needs to be made," said Russell, who noted that he was speaking as a campus president.

The restrictions on California's community colleges date back some 50 years to the state's Master Plan for Higher Education, which defined the roles of each segment -- community colleges, the University of California and California State University -- to avoid competition and duplication. But that plan is under review, and some note that CSU now offers some doctoral degrees, once considered UC's exclusive role.

Supporters note the state will need 1 million more bachelor's degree-holders by 2025, according to the Public Policy Institute of California.

Each year, De Anza College's automotive technology program graduates about 140 students. With a certificate or associate degree, they will get good jobs as technicians, but their career options are limited, said Randy Bryant, the department head.

Moving up at a dealership or opening their own shop now requires a bachelor's degree or higher, but Bryant says his students often fear transferring to a four-year business program -- and he wants them to be able to "finish what they start here."

Bryant is designing a program he has not seen anywhere else in California: a four-year automotive management degree. It combines De Anza's technical classes with courses in ethics, entrepreneurship, management, sales and marketing, and inventory control.

"The students do really well here, and if they continue here, they will complete (their degree)," he said.

Even if the bill passes, it will likely be another year or two before the four-year option becomes available. And some say its limit of just one degree program at each campus might go too far to minimize concerns about competition with public universities.

At Foothill College, the dental hygiene and the respiratory therapy programs want to offer bachelor's degrees -- which, for some, would mean just one more year of coursework -- and students are hoping they will be able to get them.

Joshua Colaci said he would otherwise need to leave the state to get a degree in respiratory therapy.

"I've already done the bulk of my education at one school," said Colaci, a Foothill College student from San Jose. "Why not just one-stop shop it?"