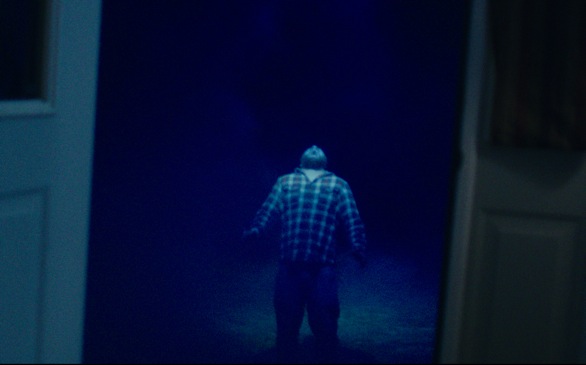 Looks like it’s just another night in small-town Maine. Not much going on except the usual shenanigans at the local watering hole. So, you grab your brother Rob and head on down the long wooded highway to meet up with your best friend Mark. As Seth Hampton, you like the predictability of your boring life. But then aliens throw a wrench in your whole life’s plans by abducting Rob and Mark in a blinding ray of blue light. Damn aliens.

Welcome to Almost Human, the debut feature film by writer/director Joe Begos. Fast forward two years, and we find Seth (Graham Skipper) and Mark’s girlfriend Jen (Vanessa Leigh) are still recovering from the repercussions of being the last two people to see Mark (Josh Ethier) alive before evaporating into thin air. People think they’re crazy, and they doubt their own sanity. But nothing could have prepared them or the town for Mark’s return, especially with his new unquenchable thirst for murder and bloodshed.

Almost Human made its world premiere at last year’s Toronto International Film Festival (TIFF). Begos describes his film as one of the only splatter/slasher films with an alien abduction twist. It was made on an unabashedly low budget, and it’s not hard to tell where the filmmakers decided to cut corners.

The genre of low-budget slasher films comes with certain expectations, especially if aliens are to be included (e.g. bad acting, cheesy effects, a flat script). Almost Human has all of those in spades.

But the films that inspired Begos most were The Evil Dead (1981) and Bad Taste (1987), and those films shine because of their will to do whatever the hell they want and how they want. Begos is simply mimicking them. The Evil Dead is iconic because of its never-ending ploys to gross and freak you out, while embracing its magnificent ‘80s cheese. You can tell Begos wants to go there, starting with the titles that come off as somewhat retro. However, the film ends up underwhelming when it never surpasses its forerunners.

There is something to admire in Begos’ work, though. He passionately uses practical effects versus CGI. In his mind, if directors with hundreds of millions can’t make CGI look real, then neither can he. So, he takes it upon himself to create effects that he can physically interact with and alter himself, having more control over the ultimate outcome. After seeing Almost Human, however, I can only imagine how funny installing his effects must have been.

In many indie slashers, there are simply outrageous scenes that make you giggle even if you’re in a dour mood. Almost Human has more than a few, and some of them are so incredulous it’s impossible not to rewind.

Mark, the abducted lumberjack, is now an alien drone with zombie-like tendencies, in that he spits some tentacle-like object from his mouth into other people’s mouths after he kills them. And then he impregnates them with…themselves? They eventually foam at the mouth until it forms a cocoon around them, where they then emerge and are reborn into creatures that are just like Mark. One can only imagine what Mark does with that “tentacle” when he gets a hold of his long lost girlfriend. It’s funny, outrageous and strangely insulting all at the same time, which I’m sure is exactly what Begos was going for.

When all is said and done, even after all the laughs and admittedly enjoyable scenes of needless slaughter, Begos doesn’t deliver the punch that’ll make it last in pop culture’s eye. All of those slaughterhouse tropes are there, but they aren’t loud or new enough to reach even a cult status. One eyebrow-raising moment isn’t sufficient to make Almost Human even almost good.

Almost Human will be released by IFC Midnights this spring.

Note: Almost Human is not to be confused with Fox’s new television series of the same name.