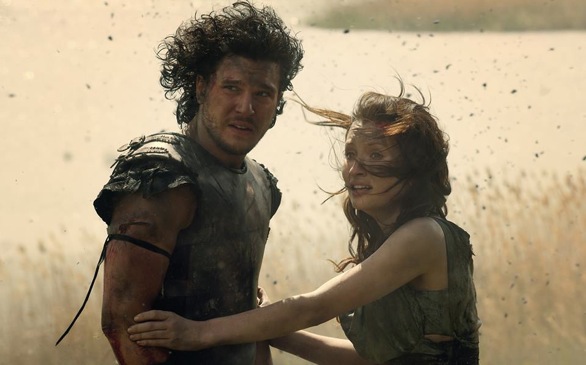 Pompeii is an action movie with underlying themes of romance.
(Credit: Facebook.com/PompeiiMovie)

Director Paul W.S. Anderson (Resident Evil), known for his action flicks, creates another epic adventure that follows the life of slave/gladiator Milo (Kit Harington) as he kills and conquers his opponents for his own survival. But he is not the cold-hearted killer he appears to be. Fate brings Milo and aristocrat Cassia (Emily Browning) together under unusual circumstances, and Kit finds a new reason to survive in the coliseum.

When the foreboding Mount Vesuvius erupts, turning the world upside down, Milo must find Cassia amidst all the death and destruction. Together they must fight the odds to avoid death that lurks around every corner.

For those looking for an action-packed film, look no further. Blood, fire and death are prominent throughout Pompeii. The fight scenes are very reminiscent of Gladiator with the knowledge that they fight not only for survival, but also for their own beliefs. Despite the large numbers of deaths, there is not an excessive amount of gore, making it enjoyable to watch rather than sickening.

This film keeps the heart racing, as Milo never seems to find a moment of peace. One moment he is fighting for his life and for the entertainment of spectators. The next, all hell breaks loose when Vesuvius erupts and death is no longer confined to the coliseum.

Although a very male-targeted film, females still have a reason to watch. For one, there’s the attractive male lead, Kit (who does appear topless), who women already swooned over thanks to his character John Snow in “Game of Thrones.”

There are also strong romantic themes, especially tied in with Cassia’s narrative. In the midst of obliteration, Cassia and Milo fight for unconditional love and for the chance to find true happiness.
However, there are a few downsides to the film. Those with a keen ear for accents may find it distracting as some of the non-English actors accents slip in and out. These frequent changes in accent detract from the movie and become almost humorous. But then again, the characters have British accents despite being set in Italy.

The writing tries to be moving, but in some scenarios it is unrealistic. Milo’s relationships with some of the other gladiators, particularly with Atticus (Adewale Akinnuoye-Agbaje), transforms from “foes” to “brothers” in the blink of an eye. It is heartwarming but improbable. Although a friendship could stem, the extent of theirs goes beyond belief.

Additionally, if you were looking for a historically accurate film, this is not the one for you. Although the overall premise is correct (Mount Vesuvius does erupt.), much that happens throughout the film does not fit with the history books. The film portrays death before ash or magma reaches the town, but this is not a real chain of events.

Overall, Pompeii makes for an entertaining action film with a romantic undertone. Rather than being purely an action or romance movie, it merges the two genres well so that it has something for everyone.

Also, if watched in 3D, you’ll feel almost as if you’re there yourself, dodging the very realistic debris flying at your face.

Pompeii is now playing in theaters.