Sanaa Lathan: Falling in Love in Something New 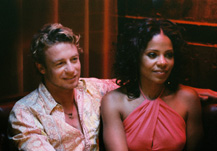 Much like her character in the romantic comedy Something New, Sanaa Lathan is an educated, well-spoken professional woman navigating the choppy waters of dating and relationships.

Something New was written by Kriss Turner (who has also penned episodes of "Living Single" and the new UPN sitcom "Everybody Hates Chris"), directed by first-timer Sanaa Hamri and inspired by a Newsweek article from a couple of years ago stating that 42.4 percent of African American women are not married. In the film, Lathan plays the part of Kenya Denise McQueen: a thirtysomething senior manager at a prestigious LA-based accounting firm who just purchased a house and is also on the verge of making partner. Kenya is thriving in every aspect of her career but, at the same time, isn’t quite managing to keep her love life afloat.

Things begin to change, though, when Kenya – somewhat against her will – is set-up on a blind date by one of her friends. And as awkward as Kenya thinks it might be, she sucks it up and treks to a crowded Starbucks to meet this "ideal" guy. All of Kenya’s red flags go up, however, when she realizes the man she is being set up with – a sexy landscape artist named Brian (Simon Baker) – is Caucasian, not African American.

"The Newsweek article said 42.4 percent of black women aren’t married, and it’s because we’re climbing up the corporate ladder so much faster and our male counterparts are either going to jail, dying or dating outside the race. So what do you do if you want to have a family?" says the 34-year-old Lathan, who expounds upon the film’s plot and Turner’s script.

Lathan also mentions that, before the film, she had actually vowed to never go on a blind date again. "I have [been on a blind date] and it was a disaster. And I swore blind dates off because it turned in to sort of a stalker situation. But after doing this movie, maybe I’m going to be a little open again."

Whether or not Lathan opens up to blind dating again after the release of Something New is a minor element compared to the valid points she feels are addressed in the film. According to the actress – who has also starred in Love and Basketball, Disappearing Acts and Brown Sugar – Something New is important for audiences to see not only because it’s a charming film, but also because it deals with issues not normally found in typical Hollywood fare.

"The thing that’s so great about this movie, for me, when I read the script, is that we’re so used to seeing the [race] issue dealt with between a black man and a white woman, and this is really one of the first times you see it on the big screen with a black woman and a white man. And the difference is, usually the couple is against the world. And in this case, it’s [Kenya]. Her friends are not really against her, her family’s really not giving her too much [grief]. It’s really her own prejudices, her own struggle with it," says Lathan.

"So this could be a metaphor for doing anything outside the box that you put yourself in, like it could be a relationship or going to a different religion or dating somebody outside your class lines like [Kenya] did," Lathan adds, posing a very apropos question. "Like, when you step outside of your comfort zone, how do you deal with that?"

Lathan – who is currently working on developing a script with her Love and Basketball and Disappearing Acts director Gina Prince-Bythewood – is no stranger to venturing outside of her comfort zone. According to the actress, who says she’s been working in the industry for just short of a decade, it’s always somewhat awkward being an actress in the spotlight because, no matter what, people are always going to be talking about you and spreading around information that isn’t necessarily true.

"I learned early on in the business that when you’re doing anything on any kind of level, people are going to talk. I’ve been in the business for about nine years, and people have been talking about me since the beginning," she says. "But it’s also human nature. People gossip in high school, in the corporate world. On our level it’s just put out there."

Some things that are known about Lathan include the fact that she was born in New York, raised by parents familiar with the industry (her mom was a Broadway actress and her dad worked behind the scenes at PBS) and, after attending college at UC Berkeley, she attended the prestigious Yale School of Drama in New Haven, Connecticut.

After earning her masters and starring in a number of plays in New York City, Lathan eventually made the permanent trek to Los Angeles, where she would earned parts in television shows like "Moesha" and "Lateline" and films including Blade and Life, the latter of which starred Eddie Murphy. Before long, Lathan’s roles got larger and more complex – she costarred in The Wood, The Best Man and the independent dramedy Catfish in Black Bean Sauce – before her career officially exploded into leading lady status in Prince-Bythewood’s 2000 film Love and Basketball. Lathan played a rough-edged, college-bound basketball player who also succeeds in finding love off of the court.

After that, Lathan earned more leading roles in smart films like Disappearing Acts and Brown Sugar before being cast as Kenya in Something New. According to Turner, Lathan was always the actress envisioned for the role.

"From when I wrote it, Sanaa Lathan was the only person I ever had in mind to star. I saw her face while I was writing it; there was no one else. She has such sophistication, she is a real woman, and she’s a wonderful actress."

The film’s producer, Stephanie Allain, concurs, saying that Lathan "was always, from the beginning, the top choice for the movie."

With such praise being showered upon her, it’s a good thing, then, that Lathan was able to fully relate to her character in Something New.

"I’ve dated interracially, I’ve had girlfriends that have dated interracially, and you realize when you’re in that situation that sometimes you have your own prejudices and your own issues that come up that you never know you had until you’re in that situation. I’ve had girlfriends call me, they’re in a wonderful relationship with a white man, but then it comes time to go to a black event and they don’t want to take them. I think we all understand where that pressure comes from. I think there’s a feeling of abandoning your people," says Lathan, concluding, "I think that at this point we should just follow our hearts and really try not to worry about what other people think, but it’s still there. So I definitely identified with Kenya."