'House of Cards' Season 2 on Netflix: What People are Saying 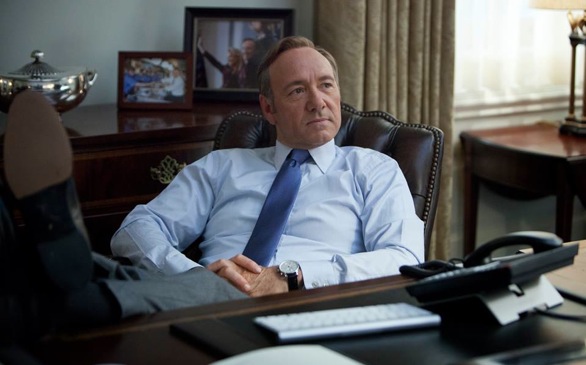 All episodes of Season 2 are available now on Netflix.
(Credit: Facebook.com/HouseofCards)

Valentine's Day delivered much more than roses and chocolates this year; it also marked the return of "House of Cards" on Netflix.

Since that time, fans of this political drama series have been able to give into their deepest binge-watching desires. Critics and reviewers have since had time to share their opinions with the public.

Todd VanDerWarff, a writer for the A.V. Club, voiced his strong opinions regarding Season 2 and the show in general:

“In almost every way, season two of 'House Of Cards' is an improvement on season one. It both figures out a much better use for Robin Wright as Frank’s wife, Claire, and better indicates that Frank is making most of his Machiavellian schemes up as he goes along… Sure, the show’s “politics” feel ripped from a Politico comment section, and yes, the show’s plot doesn’t really go anywhere until the final handful of episodes. But the season also tosses an incredible number of balls in the air and manages to keep juggling them, which is impressive in and of itself.

However, the series still struggles with the foremost issue that bedeviled season one: It’s not about a goddamn thing, other than getting you to keep watching the episodes by keeping the plotting as obvious and easy to understand as possible. What the series has to say about American politics is brain-numbingly basic and devoid of nuance, largely boiling down to the easiest kind of cynicism but then refusing to grow beyond that…'House Of Cards' is a series intent on congratulating the viewer for being suspicious of politicians, but it’s not particularly interested in examining root causes for political corruption—or even the motivations of its protagonist Frank, and why he so covets power. It’s the ultimate binge-watching experience, in that it rewards even the laziness of thought.”

Ross Miller, a writer for the Verge, gave his opinion on the series as well: “For better and for worse, the new season of 'House of Cards' is in many ways a continuation of the last one. Old characters go away and numerous newcomers take their places, to varying success. It’s a show about Washington and power, but more than that it’s about the Underwoods, a character study of a uniquely politically-adept family.”

Fans such as Edward Ghazaley have  voiced their own opinions about the show, writing on the Rotten Tomatoes Friend Reviews page: “[It] brings back all that we loved from the first season but with a meaner Francis and a more conflicted Claire. While it is impressive on almost all levels, the aspect of the series I find most enticing is its visual design--the cinematography is spectacular and the colour tones are perfect..."

In addition, "House of Cards" enthusiastic Peter Foy wrote, “'House of Cards' season 2 starts off with a rather shocking plot development (which advertising and critics have blissfully kept from spoiling), and the storyline doesn't slow down at all. It's just as binge-worthy as the first season, and we can now finally see why Netflix is doing us a whole favor by releasing whole seasons…”

Not all fans reacted to the show as positively as Ghazaley and Foy, however, with another viewer Pasquale Balena commenting: “The writing is weak in this season. To begin with, they killed a huge story line leftover from the first season in the first episode. It ended way too abrupt and seemed like the easy way out for the writers who had written themselves into a corner.”

Despite a mix of positive and negative reviews, this D.C. drama certainly had dedicated viewers committed to their screens for hours on end. The majority of the reviews would suggest that whether you had a Valentine or not this year, you should take some time to cuddle up next to your computer and develop a deep and meaningful relationship with "House of Cards."