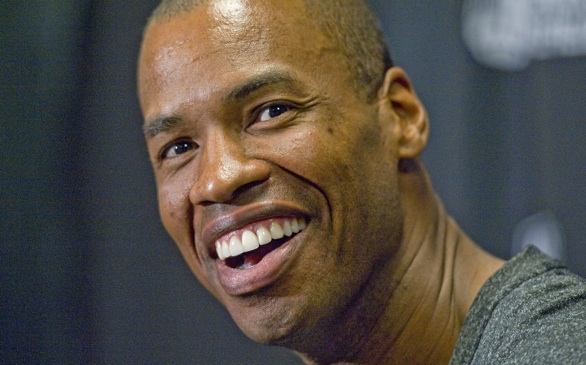 On an ordinary night at Staples Center without any playoff implications riding on the result, history still happened.

And if you weren’t aware of it, the standing room only press conference and an additional exit entrance to accommodate the fire code gave it away.

After 10 months announcing his sexual orientation in a Sports Illustrated article, former Harvard-Westlake standout Jason Collins became the first openly gay athlete to be on an NBA roster by signing a 10-day contract Sunday with the Brooklyn Nets.

“I’m very thankful for this opportunity,” Collins said before the Lakers hosted the Brooklyn Nets on Sunday at Staples Center. “That’s why I work so hard and I train and do what I do.”

Collins received that opportunity when he entered the game at 10:28 of the second quarter. Most of the crowd greeted Collins with warm reception, but the response hardly matched the volume reached after a Kobe Bryant game-winner.

That’s likely what Collins wanted. He downplayed his role as a “crusader” for the gay and lesbian community.

Former Missouri defensive end Michael Sam recently announced he was gay mere weeks before the NFL combine and NFL draft. Forward Robbie Rogers of Major League Soccer’s Galaxy also announced last year he was gay. Rogers, a friend of Collins, also became among the many who texted and called Collins for support on Sunday.

Collins, a 13-year veteran who carved himself a niche as a physical interior defender, recalled hearing a groundswell of support through former coaches and teammates. He also talked with Rogers.

“He was offering advice just like all friends do,” Collins said. “He has experience going down this path. Just like any good friend, we talked about life.”

The NBA, Lakers and gay-advocacy groups all offered support.