L.A. Community Colleges Urge Students to Sign up for Obamacare 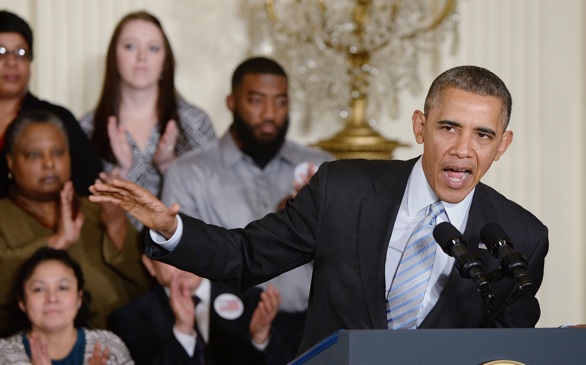 Danielle Alberts fell and broke her right ankle in three places in 2012. Alberts, who earns about $9,000 a year, went to the hospital and was charged nearly $4,000 for a shot and some pain medication.

Alberts did not have health insurance. She refused a cast because it would have cost $500 more and she didn't have the money from her jobs as a security guard and caregiver. The ankle healed poorly, leaving her with a limp, and she wears a brace to keep the swelling down.

So when the 25-year-old Los Angeles Trade Technical College student received insurance under Covered California, the state's health insurance exchange for the public, she began searching for a doctor who could help her walk normally.

"I want to have my old life back," Alberts said. "I want to run, I want to exercise, I want to play with my nieces and nephews."

Los Angeles Community College District officials hope Alberts is part of a wave of students signing up for medical coverage under the federal Affordable Care Act. Students in the district, the largest two-year college system in the country, are required to be insured by March 31 or face a $95 fine from the federal government. There will be a series of fairs this week to encourage more students to enroll.

"A healthy student is more likely to achieve success" said Mike Eng, a member of the district's board of trustees.

District officials said they believe about half of the nearly 150,000 students who attend the district's nine campuses lack coverage, but that was just a guess.

Signing up those who have been called the "young invincibles" — generally healthy adults in their 20s and 30s who don't incur large medical bills — is a key part of the federal healthcare overhaul. Only by collecting premiums from many more of those infrequent users of medical services can insurance plans expect to offset the higher costs of treating newly insured older and sicker people.

For the White House's reforms to succeed, 40% of those signing up for insurance must be 34 or younger, experts have said. As of last week, the rate of people ages 18 to 34 signing up for coverage held steady at 26% of Covered California enrollment. That age group accounts for 36% of people eligible for premium assistance.

District officials say community college students — the majority of whom have moderate or low incomes and are underinsured — will benefit from more regular medical care instead of waiting until ailments become serious and then visiting an emergency room.

"You're doing yourself a tremendous disservice if you don't have insurance," Eng said.

Stephanie MacDougall, a 35-year-old fashion design student, said she had researched medical insurance in the past but said the cost was always prohibitive. "So I haven't been to a doctor in five years," she said.

When she felt abdominal pain several years ago, MacDougall took an ambulance to the hospital, where doctors discovered ovarian cysts. They gave her pain medication but did not treat the growths.

MacDougall said she hasn't been able to pay off the $12,000 cost of the ambulance trip and medical bills. Worse, she's not sure whether the cysts have been getting worse, although she hasn't had any serious symptoms.

"Peace of mind would be great," said MacDougall, who took a Covered California application from a table and tucked it into her backpack.