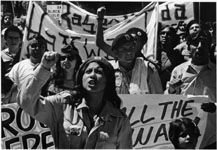 Untitled Document California – the center stage of 20th century street wars – was once a place where the weak constantly united to challenge the politically strong. While some sat back and grooved to the soothing sounds of the Beach Boys or rock ‘n’ rolled with the Beatles and Jimi Hendrix, thousands of others were busy preparing the battles that released enough rage to re-write the books of history.

The Whole World’s Watching at the California African American Museum (CAAM) is an exhibit that follows the social unrest of the 1960s and 1970s through 90 documentary photographs – revisiting some of the state’s most monumental issues.

Remember when the right to free speech was ignored? Or what about when workers rights were abused more often than they were respected? The World’s Watching photos shine a spotlight on the coordinated chaos that developed and confess the problems of the past – many of which are eerily similar to the brutal battles still taking place in the streets around the world today.

Feb. 11 is L.A.’s last chance to come face to face with the CAAM exhibit that exposes the pitfalls of the Summer of Love and the horrors of war. So, step inside the injustice that ignited events like the TWA Strike and the army draft-card burning arranged in 1967 as Campus Circle gives you a snapshot of sunny California’s dark history.