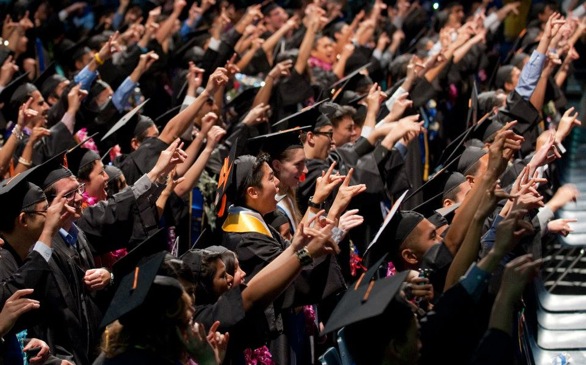 UC Irvine’s plan for a massive, $2-million commencement ceremony in a baseball stadium -- possibly with President Obama delivering the address -- has stirred anger among some of those it's meant to celebrate.

The Orange County campus has asked Obama to deliver the school’s commencement address on June 14 at Angel Stadium in Anaheim. The university is scheduled to send about 10,000 invitations from students, alumni and staff to the White House this week.

But to accommodate the event -– which is also a 50th anniversary celebration for the campus -- the university has canceled the smaller ceremonies traditionally held by individual schools, angering students and families who have sent invitations, booked travel and wished to walk across the stage.

As of Tuesday afternoon, an online petition requesting the school hold the smaller ceremonies had garnered more than 2,000 signatures.

For some, the prospect of hearing a speech by the leader of the free world does little to assuage the anger of losing a personal celebration of years of study.

Alex Liao, an international studies major, said he was looking forward to walking across the stage. The smaller ceremonies could be long and tedious, he said, but at least each graduate received a little time in the spotlight. Ideally, students could take part in both ceremonies, Liao said.

“This makes it less special for each graduate,” he said.

UCI spokeswoman Cathy Lawhon said the university could not accommodate the 8,000 students and their guests safely on campus so the administration decided to hold it at the stadium. It also could not staff the large event and the smaller gatherings the same weekend.

The university is encouraging individual schools to plan smaller ceremonies on their own that weekend, if they wish, Lawhon said.

“I understand their wanting to have their names called and that is what the smaller individual school-based celebrations will do,” she said.  “They will definitely be celebrated and appreciated in the large event -- the class of 2014 has been an exceptional group of students.”

Nancy Doran, whose daughter is a drama major, said students and parents were never informed of the change. Her daughter happened to check the school’s website and found out.

“It’s horribly disappointing,” she said. “I want to see my daughter have her moment.”

The university is working with a vendor to reprint invitations at no cost. If families have already made travel accommodations, they should contact the university.

“They are welcome to call the campus and we’ll see what we can do,” she said.