UCLA, USC Students Work Together to Create Musical Show: 'Murder Up in the Air' brings two crosstown rivals together. 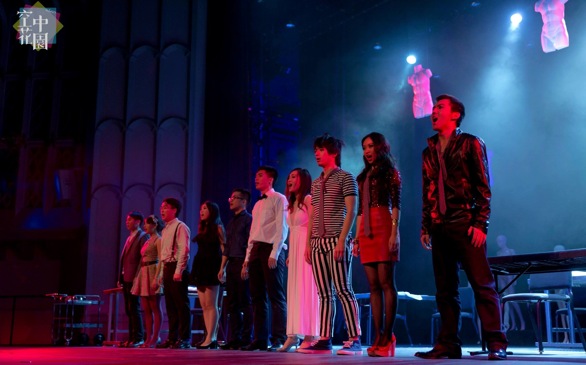 The cast contains students from USC and UCLA, all with different majors and theatre backgrounds.

Here in L.A., you’ve probably heard about the intense rivalry between two powerhouse universities: UCLA and USC. From sports to academics, these institutions are constantly competing against one another to earn the right to be called “the best.”

However, an unlikely partnership has developed between the two schools when it comes to musical theater.

Adapted from an original Chinese screenplay, "Murder Up in the Air" is a musical performed by USC and UCLA international students. The story line follows an eccentric homicide incident that questions the meaning of money, life and love. With brilliant dances and soul-touching music perfectly integrated into a story revealing the truth of human nature—love, lust, envy, and wrath—this play continually evokes strong emotional responses from its audiences.

"Murder Up in the Air" debuted at USC Bovard Auditorium Dec. 8 and achieved an instant success. It will launch its second formal performance at UCLA’s Royce Hall on April 5 at 7 p.m. Ran Zhang, a famous Chinese musical producer and one of the creators of the original screenplay, commented, “This modification has exceeded the original.”

This time, the musical will be run with English subtitles on a LED screen, which will not only attract Chinese students but also students who are musical lovers from all over the world.

The cast and crew consists of 30 students; all of them are USC and UCLA undergraduate, graduate and graduated students. Among them is chief executive producer Ziming Li, a third-year student studying economics at USC, and Tao U, alumnus from USC’s Cinematic Arts School in film production. U is the director and one of the main characters in the musical.

According to Li, the "Murder Up in the Air" workshop is a nonprofit organization with the purpose of introducing modern Chinese theater art to American mainstream audiences and enriching life of overseas Chinese people. From renting the location to organizing play rehearsals, Li personally invested $30,000 into the musical.

While talking about why he does not involve commercial activities, Li said, “Commercial benefits will moderate our purest love and passion about musical, which violates my original intention—providing a platform for me and other students to show our talents and develop our potentials.”

Putting together a musical involves a lot of hard work. Perhaps the most important aspect is, well, the music. "Murder Up in the Air’s" music director is Haijing Lin, a fourth-year USC student studying urban planning. He said, “The hardest part in the process is to re-adapt the music. We couldn’t get the original music, so I had to re-adapt all the songs from a previous live cast recording. It was a huge project and it took me four months to finish that.”

As a play performed by a newly established student organization not many people have heard of by, "Murder Up in the Air" had a hard time getting publicity. However, thanks to the help of USC and UCLA CSSA (Chinese Student Scholar Association) and ICON Union, more students are starting to pay attention to the musical.

As a cooperative effort of students from USC and UCLA, the success of the musical gives these enthusiastic students a new mission: to forge a bond of friendship between the two schools that are known for their rivalry. According to Li, the rivalry between USC and UCLA actually did not set obstacles for the musical. It seems the youthful passion for musicals breaks down the confrontation.

“Except that I had a hard time negotiating with the person who is in charge of renting the location at UCLA, the rivalry didn’t cause any trouble for us,” he said. “The musical actually promotes the friendship between Chinese international students in the two schools.”

In order to find the most talented students for the musical, Li opened the recruitment to students of all years and all majors at both schools. The recruitment process took a long time, and the selection was highly competitive. After three screenings, a group of excellent students stood out: Tao Yu as “Doctor Zhao,” Yangwen Zhai as “Chairman,” Mengqi Zhu as “Father,” Jiani Ding as “Yanyan Kong,” Yiche Wu as “Pipi Xia,” Siyun Lin as “Wenjing Su,” Yuzhen Yang as “Chief,” Yuting Shen as “Nurse,” Xile Huang as “Fang Wen” and Yang Lu as “Su Su.” Hanwen Lei designed the set, Xiamo Pan is taking care of the costumes, and Xian Wu is in charge of logistics.

As for future plans, Li hopes "Murder Up in the Air" can reach more audiences and carry forward Chinese culture to make people enjoy this great visual and audio experience. He also hopes the show can have a tour in New York after it matures.

When the passion of youth collides with great inspiration, when the love for creativity combines with great talents, when a close team has a great ambition to achieve success, an amazing show stands out.

As famous Hollywood producer Janet Yang (The People vs. Larry Flynt, The Joy Luck Club) said, “I so wish every person I know could see this brilliant, outrageous, hilarious, seductive, engaging work. Alas, this was a one-time event.”