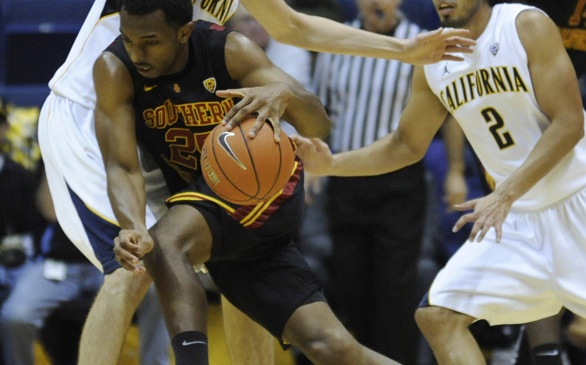 There was a typical start, and the usual finish, to a USC basketball game at the Galen Center earlier this month.

Trojans guard Byron Wesley wasted little time doing what he does best: driving hard through the defense toward the basket. After being fouled, he sank two free throws to boost USC into an early lead.

By the end, Wesley had again led the Trojans in scoring, this time with 20 points against Utah. Yet the result was all too familiar — another loss in a Pac-12 Conference game.

In its first season under Coach Andy Enfield, USC has lost its last eight games and 13 of its last 14, and languishes in last place in the Pac-12 with a record of 10-17 overall and 1-13 in conference games.

The 6-foot-5 Wesley, a junior guard, consistently has been the one bright spot and an emerging leader of the team. But in this trying season, even Wesley has stumbled.

While USC made a trip to Stanford and California last week, Enfield left Wesley at home for an unspecified violation of team rules. The Trojans lost both games.

After practice Tuesday, Enfield and Wesley declined to describe the violation but said Wesley, 21, would return when USC hosts Oregon State on Thursday night.

"Everything that happens in our locker room stays there," Enfield said. "He made a mistake. We need him to step up and be a leader on the court, off the court, in the classroom, in the community, and lead by example."

Wesley called the violation "unacceptable" and added, "I let a lot of people down this weekend and, to be honest, I feel terrible about it. All I can say is that this won't happen [again] from this point on."

Wesley is averaging 17.6 points per game, tops among the Trojans and sixth in the Pac-12. Before his violation, he'd been even better, averaging 22 points in his last five games. He also leads USC in rebounds with an average 6.9 per game.

"He's very good at getting to the basket and he's a good defender," Stanford Coach Johnny Dawkins told reporters on a recent conference call. "He's become one of the best players in the conference."

Still, parts of Wesley's game need work if he wants to fulfill his dream of playing in the NBA like his friend Darren Collison, the former UCLA guard now with the Clippers.

On the plus side, Enfield said, Wesley is "an elite driver to the basket" who not only scores but draws defenders in doing so, leaving his teammates free in case he passes the ball.

But Wesley would do well to make those passes more often, the coach added.

He averages 2.3 assists, but Enfield said, "He's so good at driving the ball and the defense collapses on him, I think he has the capability . . . to average four or five assists a game."

Wesley said he also needs to be more consistent shooting the ball. His field-goal percentage is 45.7% this season, 33.3% from three-point range.

"Right now I'd be considered a streaky shooter," he said. "I need to be a knock-down shooter. Once I develop that part of my game I'll be really hard to guard."

His name actually is Byron Wesley Jr., although the "junior" routinely gets dropped, he said, adding that "I actually like it."

Born in Monterey, Wesley played for Rialto High as a freshman — his father was the team's coach — then spent one year at Cajon High in San Bernardino before playing his junior and senior years at Etiwanda High in Rancho Cucamonga.

Wesley averaged 19.2 points as a senior at Etiwanda and was ranked as the No. 1 high school player in California by Cal-Hi Sports.

His dad now is basketball coach at San Bernardino San Gorgonio High and his mother, Chantal, is a special-education teacher. Wesley also has a sister, Monique, who plays softball at Cal State Fullerton.

"My family is a big part of my life," Wesley said, "and they're able to come to every game." That's a key reason why he chose USC, where he's majoring in psychology.

"Those first two years playing for him made me not only a tough basketball player but a tougher person," Wesley said. The effort included "getting to the gym early, leaving the gym late and coming in on off days," he said.

But his first two years also were losing years for USC, and Wesley wants to finally be on a winning Trojans team.

"The losing is really hard for me and disappointing," Wesley said. But he added, "I give this team a lot of credit. We haven't folded, we've fought every game. We just have to figure out how to win."