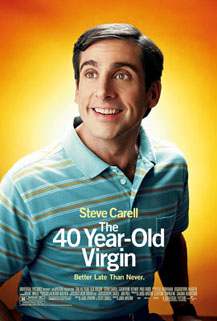 Untitled Document With co-writers Apatow (who also directs) and Steve Carell at its helm, The 40-Year-Old Virgin was one of the most successful, not to mention hilarious, films of last year. The premise of Virgin itself is a charming and heartfelt gas, featuring Carell (of Bruce Almighty and television’s "The Office") in the titular role of Andy Stitzer, a quiet, middle-aged electronics store clerk who has never had sex.

Sure, he’s tried, but when none of his romantic endeavors worked out, Andy simply gave up. And he’s been leading a fairly reserved, sex-free life until he’s asked about his virginity during a coworker’s poker game. When his fellow employees (led by Paul Rudd) find out that he’s never officially "done the deed," they make it their mission to get Andy laid. In preparation for his first big night, the guys get him waxed, boozed and ready. The pressure really begins to build for Andy, though, when he meets a single mom (Catherine Keener) with whom he begins a loving, thoughtful relationship.

Virgin is the brainchild of both Apatow and Carell, the latter does a fantastic job of bringing the character of Andy Stitzer to life. On Tuesday evening, Feb. 7, the ArcLight in Hollywood will bring the film back to the big screen. Following a 7:30 p.m. screening, Apatow – whose pre-Virgin credits include writing episodes of "The Larry Sanders Show" and "Freaks and Geeks" – will be present for a special Q&A session.

ArcLight Cinemas is located at 6360 W. Sunset Blvd. (between Vine and Ivar, with DeLongpre to the south), in Los Angeles. Parking is available in the garage adjacent to the theatres. Self-park entrances are off Ivar to the west, DeLongpre to the south and off Sunset, just east of the Cinerama Dome. For more information or to purchase tickets for this screening, visit www.arclightcinemas.com.
Article posted on 2/1/2006
This article has been viewed 2534 times.