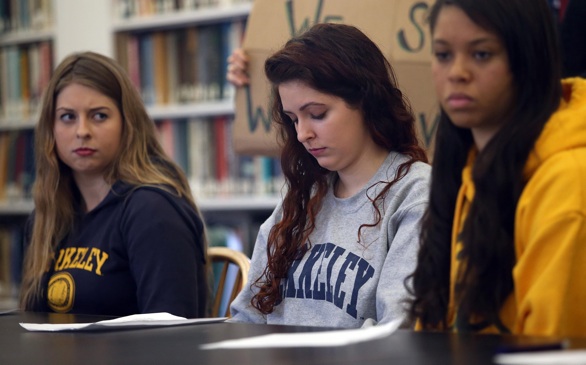 In a petition to the U.S. Department of Education’s Office for Civil Rights seeking a formal investigation, the students charged that UC Berkeley procedures discourage victims from reporting sexual assaults, favor assailants in the adjudication process and revictimize survivors.

“They are deliberately indifferent to this and they know what they’re doing and they’ve been doing this for years,” Sofie Karasek, a Berkeley junior who helped organize the complaint, said in an interview. “It’s jeopardizing the safety of students on campus.”

The Berkeley grievance is the latest in a wave of filings at universities nationwide alleging violations of Title IX, the landmark 1972 anti-sex discrimination law. Under Title IX, institutions receiving federal financial assistance must conduct impartial investigations of sexual assault.

Students at dozens of schools have filed Title IX complaints since the Department of Education issued a letter of clarification about the law three years ago, including groups at the University of Southern California as well as Occidental College. Both schools are being investigated by the Office for Civil Rights.

Claire Holmes, a spokeswoman for UC Berkeley, said the university couldn’t comment on the complaint because they had not seen it yet, but had been taking “meaningful steps that really address these issues.”

In a statement Tuesday, Chancellor Nicholas B. Dirks announced several changes to campus sexual assault response procedures, including the creation of a new position to help survivors through the reporting process and hiring an additional investigator to deal with cases.

“We will do what is necessary to create and sustain a culture of prevention and reporting within our community,” Dirks wrote. “I also want to be clear that we will hold members of our community accountable for violating campus sexual assault policies.”

This is not the first time Berkeley students have spoken out against the university and its policies. Karasek has been pushing for changes for more than a year, following a frustrating experience reporting a sexual assault.

She said she was raped by a peer in a student organization whom she later found out had assaulted several other women. When they took their case to the university, Karasek said, no formal investigation was launched and repeated efforts to follow up with the administration over the course of 10 months were rebuffed.

Days before her assailant graduated, she said, Karasek heard that the case had been resolved; she had never been asked to provide evidence or testify at a hearing.

“You don’t expect an assault,” Karasek said. “But what you expect even less is that when you report it to someone you think is going to help, they’re going to completely shut you down.”

She was one of nine students to file a separate federal complaint with the Department of Education last May under the Clery Act, which requires colleges to keep and disclose statistics on campus crime. Karasek said they still have not heard back about that filing, prompting the students to proceed with the Title IX complaint.

The effort has extended to the UC Berkeley student government, which passed a vote of no confidence in the university’s sexual assault policies last April, and the state auditor, which launched a probe into four public California universities, including Berkeley, over the summer.

But Karasek said little has changed so far besides a new rule that allows victims to appeal the result of their cases.

She called for greater involvement on the issue of campus sexual assaults by the federal government, which can fine or, in extreme cases, remove federal funding from schools that are in violation of Title IX.

“It’s not just that Berkeley has a problem,” Karasek said. “Or that College X in the United States has a problem. It’s that the federal government has a problem with enforcing the laws that are on the books and they need to take action.”

Campus News
‘Adulting’ is hard. UC Berkeley has a class for that
844 views