Sketches Released of Suspects in Gang Rape of UCSB Student 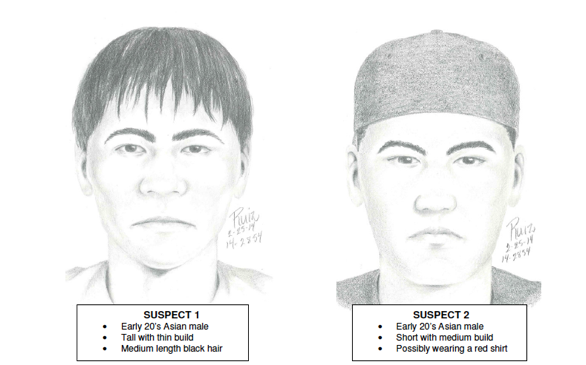 UC Santa Barbara police have released sketches of two men believed to have participated in the beating and gang rape of a female student early Sunday.

Investigators believe there were at least three men involved in the attack, but so far have only been able to get two sketches based on information they received from the 19-year-old victim, said UC Santa Barbara Police Sgt. Robert Romero.

The student told police she was approached by a group of men in Isla Vista between 12:30 a.m. and 4 a.m. Sunday. The men pushed her to the ground and severely beat her before raping her, Romero said.

She managed to make it back to her apartment afterward and report the rape.

A witness reported seeing the woman alone walking north between midnight and 12:30 a.m. on a stretch of Embacadero del Mar near Segovia Road between the town's business and residential districts. The woman was not sure where the men attacked her, officials said.

No arrests have been made. A Santa Barbara City College student also reported being raped by a man Saturday night, and another woman, also a UCSB student, was gang raped by three people in Isla Vista in January.

Authorities arrested two men and a male juvenile in connection with the January incident.