One-on-One with USC QB Cody Kessler: The Trojan talks the upcoming season, his personal life & the road to 'SC. 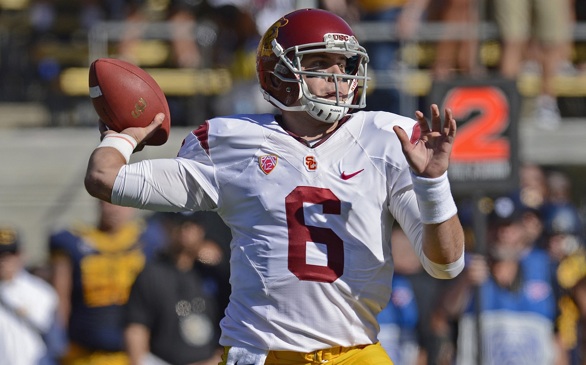 Born and raised in Bakersfield, Calif., USC’s Cody Kessler is a country boy with big dreams for himself and the Trojan football team.

Considering Kessler’s recent success as the starting quarterback for the team, it may come as a surprise that football was not always his dream. In fact, in the third grade Kessler joined a football team and quit almost immediately because of his despise for the sport.

“I hated it,” said Kessler. “Then in fifth grade, all my friends were joining the team so I felt like I had to give it another try."

Back on track, Kessler found his niche as a quarterback. By his sophomore year of high school he was playing on the varsity team at Centennial High School.

Kessler revealed his coach, Brian Nelson, was like a father figure to him. Nelson’s support and guidance helped Kessler survive the rocky terrain of recruitment. With his first offer coming from New Mexico University his sophomore year, offers from schools like Fresno State, Alabama, Pitt, Boise, Washington and UCLA flooded in during his junior year.

Despite this array of promising universities, Kessler chose USC because of his desire to play in the NFL, its prime L.A. location and his attraction to the team’s tradition of success.

“In the end, I was torn between Washington and ‘SC. But when it came down to it, I couldn't go anywhere else because I would have always thought to myself, 'What if?'” said Kessler.

“I like the location because there is so much to do and a lot of places to go for fun,” he said when asked about what he likes about USC. “I like that the degree I will get from here will help me with life after football. And I just like being close to my little brother in Bakersfield and being able to watch him play football, and he can come here and watch me."

Though the recruitment process had felt overwhelming at times, Kessler was excited to choose USC, graduating a semester early to begin training. As a red-shirt freshman in fall of 2011, Kessler learned from former quarterback, Matt Barkley. Barkley offered guidance to the aspiring quarterback, teaching him about how to handle the media, interviews and publicity. Though Kessler understood the need to watch and learn, college football felt different from his high school days; watching games and not being able to take action was the hardest part.

Kessler battled for the second quarterback spot with Max Wittek but was given the third spot. Though people suspected he would transfer to another school, Kessler remained resilient and persistent, seeing his opportunity to become the starting quarterback after Barkley left.

During the 2013 season, Wittek and Kessler battled for that starting quarterback position. During the first two games of the season, each played half of the game. It was during the third game against Boston College that Kessler was officially offered the starting position. Over the course of the season, Kessler and the team triumphed with a 6-2 record and a particularly exhilarating win over Stanford.

Still, Kessler must work to retain his starter position for next fall and pursue his dreams. Focusing on spring ball starting March 11, Kessler wants to continue being the starter and go with the Trojans to compete in the Pac-12 Championship and the Rose Bowl.

Another individual that Kessler hopes will contribute to the Trojans success is the new coach, Steve Sarkisian. Interestingly, Kessler already has a close relationship with the coach, as he was heavily recruited by Washington State during his high school years.

Kessler pointed out that Coach Orgeron (“Coach O”), who led the Trojans to a victorious 6-2 season post-Kiffin, will be sorely missed. "Coach O. was like a father to a bunch of the guys on the team. A lot of us were sad to see him go,” said Kessler.

The quarterback has faith in Sarkisian’s abilities, however, believing that this new coach will be able to successfully lead the team in future seasons. “Sarkisian came in… and handled the transition perfectly. He knows what to do,” he said.

Until next season begins, Kessler has to focus on learning new offense and defense formations, speed workouts and throwing.  He hopes to build off the success of last season, working towards a national championship, a Heisman, and of course, his diploma.

Though his focus is certainly on these future aspirations, Kessler is still enjoying his life as a college student.  Despite the fact that this young man’s life is often consumed by football, he makes time for the important things: “Duck Dynasty,” going out and hanging out with his roommates, Nelson Agholor and Max Tuerk.

Beyond college and football, Kessler hopes to one day return to his hometown of Bakersfield. Even now at ‘SC, you can spot Kessler wearing his cowboy boots to class, staying in touch with his Kern County roots. Using the money he makes from football, he wants to take care of his family in Bakersfield, one day settling down and having his own.