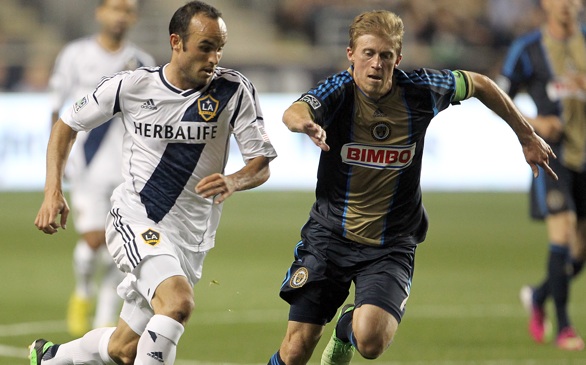 When the Los Angeles Galaxy scrutinized their player development system at the end of last season, they realized there was a gap.

Players would leave their academy when they turned 18, but there was no option for those players to continue developing with the Galaxy organization until they were ready to play for the first team.

To fix this problem, the Galaxy decided to become the first franchise in Major League Soccer to form their own USL Pro team, the LA Galaxy II.

“We felt for some time that there was a major gap from when a player left our academy until they were ready to play for the first team,” Galaxy president Chris Klein said. “We want to create a model where we get a kid at 10 or 12 years old and he hits every step from the academy, to the USL Pro team, to the first team.”

In an attempt to create a better player development system, Major League Soccer is moving away from the MLS Reserve League.

MLS is now requiring teams to have a USL Pro affiliate or field a USL Pro team of their own by 2015. The league hopes that this season will be the final year of the MLS Reserve League.

Among those teams was 2013 MLS Cup winner Sporting Kansas City, which saw the benefit of the partnership play out on the field with the case of forward Dom Dwyer. Kansas City sent Dwyer to its USL Pro affiliate in Orlando City, where the forward led the USL Pro team in scoring. Dwyer was then recalled by Kansas City and went on to score the winning goal against the Houston Dynamo that sent Kansas City to the MLS Cup championship game.

This year, 11 MLS teams have formed partnerships with USL Pro squads, with the Galaxy leading the way with their own in-house USL Pro team. Only eight teams will play in the dwindling MLS Reserve League.

“Those reserve games we found weren’t as meaningful as we wanted them to be," said Ali Curtis, Major League Soccer’s senior director of player relations and competition. "They weren’t having the impact on player development that we wanted and needed.”

The Portland Timbers are among the teams that have chosen to abandon the MLS Reserve League this season. Instead, Portland has partnered with the San Jose Earthquakes to share an affiliation with USL Pro team Sacramento Republic.

“It might take a couple years to get there, but I think we’re moving toward a model where we’re fully affiliated with USL Pro,” San Jose Earthquakes president Dave Kaval said. “You see that model working in a lot of sports – baseball being the obvious example.”

Timbers general manager Gavin Wilkinson said that participating in the MLS Reserve League wasn't an optimal way to develop players, and Portland spent months in talks with Sacramento about the possibility of a partnership.

But San Jose also showed interest in partnering with Sacramento because of its proximity to the city. Ultimately, the two teams agreed to a co-affiliation even though the partnership is far from ideal for the Timbers, whose style of play is a sharp contrast from the Earthquakes' rough-and-tumble game.

The Timbers will re-evaluate the co-affiliation at the end of the year and could look to affiliate with another USL Pro team, work with another franchise to create a USL Pro team -- the Timbers appear to be forming a strong relationship with PDL side FC Tucson after traveling to Arizona for preseason two years in a row -- or even follow in the footsteps of the Galaxy and form an in-house USL Pro team of their own.

"If it hadn't been a co-affiliation, Sacramento would have been nearly the perfect market for the Portland Timbers," Wilkinson said. "The co-affiliation is what we don’t like about it. Moving forward, we have two options: We can operate our own division two team or look elsewhere for a possible affiliation."

The Galaxy considered affiliating with an existing USL Pro team, but determined that creating a team of their own would best serve the interests of the organization.

It’s a structure that has worked in Mexico and Europe, Klein said. And it’s a system that is similar to farm leagues used in other professional sports.

Having an in-house USL Pro team will give the Galaxy the flexibility to move players up and down from the first team to the USL Pro team with ease. If Galaxy coach Bruce Arena needs more or fewer players in training, he can bring players up or send players down to the LA Galaxy II.

And the Galaxy will have full control over the style of play and philosophy exuded in their player development ranks. The Galaxy has named their former assistant coach Curt Onalfo as head coach of Galaxy II.

“We’re the model for MLS and in some ways we're also the guinea pig,” Klein said. “We will have bumps and we’ll have to make improvements, but we feel like we’ll be a year ahead in figuring these things out.”

Curtis said that MLS has talked with other franchises about the possibility of starting their own USL Pro teams, though no other MLS team will be creating a USL Pro team this season.

Still, though it is unlikely that every MLS team will create its own in-house USL Pro squad, Kaval said over time MLS teams will likely become more involved in the decisions happening within their affiliated clubs.

“We’re only in out first year,” Kaval said. “In the long term, MLS teams are going to be involved in the development of their affiliated clubs to make sure they are successful as an organization and in promoting player development.”