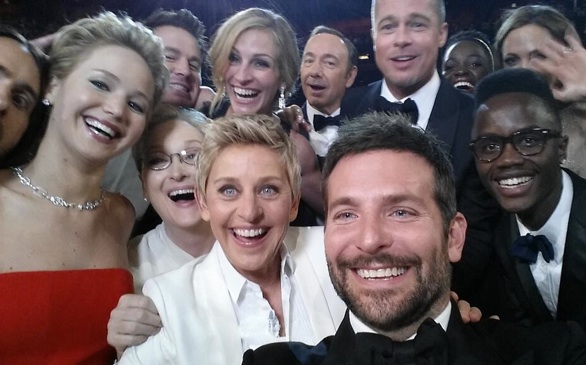 Sunday night's Academy Awards was filled with some pretty amazing moments that were funny, entertaining and even inspirational!

Here are our picks for the top 5 moments at the 2014 Oscars:

5. Meryl Streep Does the Shimmy
Pharrell Williams' hot single "Happy" got Meryl Streep to semi-get up and dance, proving his song is magically infectious!

The singer got most of the crowd grooving to the beat as he hopped off stage and danced with different audience members. Lupita Nyong'o started if off by jumping out of her seat and dancing with Williams. Even Amy Adams joined in.

However...who knew Streep had it in her? The 18-time Oscar-nominated actress did an enthusiastic shimmy when Williams came her way, showing off her personality and spunk, and therefore making it even more impossible to dislike her.

4. Matthew McConaughey's "Alright, Alright, Alright"
McConaughey, who looked particularly dapper in his white tuxedo, was the man of the evening. The rom-com star took home his first Oscar for Best Actor for his latest role in Dallas Buyers Club. When he stood at the podium to accept his award, he gave a pretty inspirational and well thought-out speech, revealing that he is no hero but will keep striving to be one.

3. Lupita Nyong'o's Win and Acceptance Speech
Lupita Nyong'o was definitely a favorite to win Best Supporting Actress this year for her phenomenal performance as Patsey in 12 Years a Slave. So, when the Kenyan actress took home the award, needless to say it was a wonderful relief to see that the Academy got it right this year.

The humble and stunning actress, who wore a breathtaking "Nairobi blue"  Prada dress fit for a princess, gave a slightly tearful acceptance speech that ended with this: "When I look down at this golden statue, may it remind me and every little child that no matter where you’re from, your dreams are valid." Bravo, Nyong'o!

2. Ellen Serves Pizza
With Ellen DeGeneres as the host, of course there are going to be hilarious moments and countless laughs at the Oscars!

Perhaps one of the funniest and realest things she did this year was order pizza for many of the audience members. Bringing out a REAL pizza boy, DeGeneres served the very hungry attendees that included Streep, Brad Pitt, Chiwetel Ejiofor, Julia Roberts, Jennifer Lawrence, Jared Leto, Harrison Ford and many others who unashamedly grabbed a slice and scarfed it down. Talk about a hungry crowd.

1. Ellen's Epic Celebrity Selfie
And lastly, DeGeneres concocted the best selfie ever, and we mean EVER, and she even made social media history!

The comedian got big names to jump in a photo with her in the middle of the awards ceremony. Lawrence, Leto, Streep, Roberts, Kevin Spacey, Pitt, Nyong'o, Angelina Jolie and Bradley Cooper were among the celebs who posed with DeGeneres. The Twitter photo reportedly garnered more than 1 million re-tweets in 45 minutes, making it the most re-tweeted image of all time!