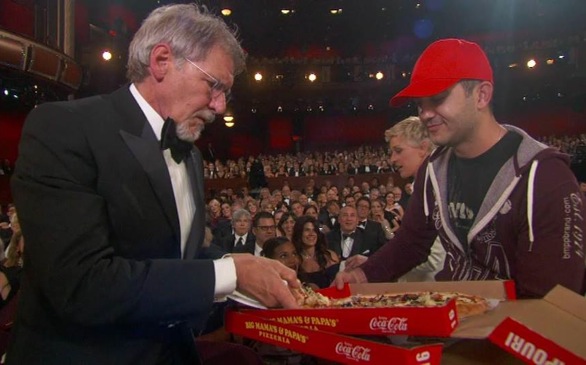 According to USA Today, the pizza delivery guy was actually the pizzeria's owner, Edgar Martirosyan. Martirosyan has owned the franchise for eight years and manages 20 stores.

After making an appearance at the Oscars, the Big Mama's & Papa's website crashed and they even ran out of dough thanks to the number of orders the pizzeria was receiving.

During the awards ceremony, host Ellen DeGeneres and Martirosyan passed out the pizza to numerous stars while they were in their seats, including Jennifer Lawrence, Harrison Ford, Jared Leto, Brad Pitt and many others.

Once they finished eating, DeGeneres went around collecting money from the celebs to go to the Big Mama's & Papa's driver.

It's currently unknown how much money in tips DeGeneres was able to collect, but according to the pizzeria's Facebook page, it's offering a free Big Papa's pizza to anyone who guesses the correct amount.