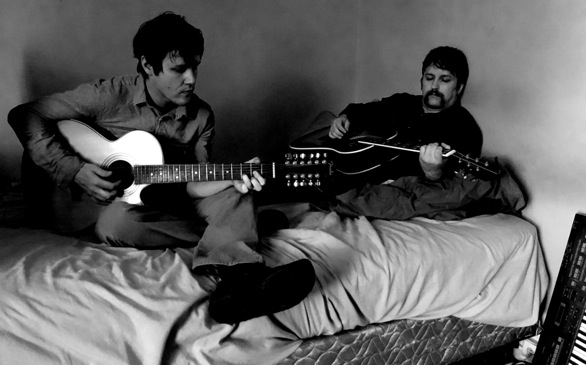 If you believe their official public relations release, the two guys behind new band New Bums didn’t like each other when they first met. Here, though, Donovan Quinn and Ben Chasny are quite the harmonious duo as they deliver a set of mellow, acoustic guitar-driven songs in a folk/Americana vein.

The slightly psychedelic “Black Bough” is a languorous musing about a bucolic scene as viewed through a window, and by the sound of it, through a haze of cannabis smoke. “Your Girlfriend Might Be a Cop,” on the other hand, has a very clear intent that has nothing to do with paranoia; this guy’s about to fall for the wrong girl.

Most of the songs on Voices in a Rented Room take their sweet time and move along at a snail’s pace, and that’s a big part of the draw. The trippy “Welcome to the Navy” is less than two minutes long, but its slow motion punch is one of the toughest on the album, paradoxically taking forever yet ending before you know it.

Some songs are embellished with piano or percussion, but basically Voices in a Rented Room is just two voices singing in harmony and two guitars playing exquisitely, yet not flashily, throughout. They sound especially masterful on the delicate “Burned.”

Quinn and Chasny are both vets of a rowdier underground scene. If their subdued side came out here because of an initial misgiving, then fans should hope that they totally hate each other by the time they make their next record.