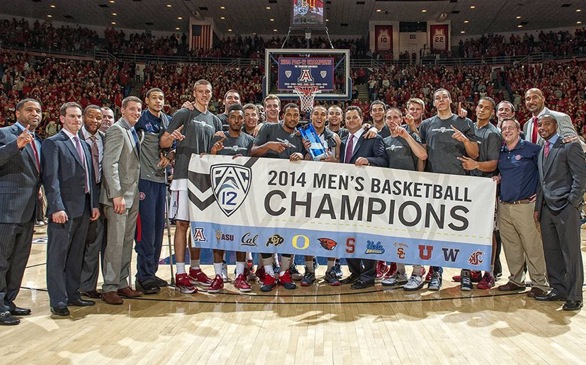 In the NFL and NBA, coaches in Sean Miller’s position would consider resting their star players to prepare for the postseason.

And it is a tactic favored by some college basketball coaches.

But Miller doesn’t plan any major changes with Arizona’s approach to its final two regular-season games, even though the third-ranked Wildcats have secured the outright Pac-12 regular-season title and the No. 1 seed to next week’s conference tournament.

Arizona (27-2 overall, 14-2 Pac-12) remains in the hunt for a No.1 seed in the NCAA tournament and could potentially land the top overall seed.

“There’s not a lot of room for error,” Miller said. “You’re talking about a coveted four spots. Every game that we play has great meaning towards that.”

The Wildcats close the regular season at Oregon State and Oregon.

While several coaches debate the merits of a conference tournament and argue playing three or four consecutive games is detrimental to NCAA tourney chances, Miller adheres to a belief winning is paramount.

“We’ve worked hard at being consistent and I think every one of us would like to finish it,” he said. “And if we don’t win, I don’t think we want to be the team that has regrets that we approached this any differently.”

In 2011, then-No.1 seed Arizona lost 77-75 in overtime in an emotional thriller to Washington in the Pac-10 tournament championship game.

The Wildcats went on to win three straight games in the NCAA tournament and advanced to the Elite Eight, where they lost 65-63 to Connecticut, the 2011 national champion.

“Sometimes you can make too much or too little of it,” Miller said. “We’re going to approach the tournament to try to win the tournament like every team that goes to (Las) Vegas.”

And speaking of Las Vegas, there will be 10 Pac-12 coaches – sorry USC and Washington State – who will give heartfelt speeches to their teams about winning the conference tournament.

That is what happens when you have a conference where four games separate second-place UCLA and 10th-place Oregon State.

“We feel like once we get to Las Vegas, we have a chance, especially in the opening round,” Beavers coach Craig Robinson said. “Whoever we play, we feel like we probably played well against them or we had a chance to beat them. We know our season is not over and we know we have a lot to play for.”

Since the conference adopted first-round byes in 2006, a team seeded lower than fourth has been the tournament champion in two of the past eight years. Colorado (sixth seed) did it in 2012 and USC (sixth seed) prevailed in 2009.

“There’s a lot of excitement for a lot of teams, us included,” Robinson said.

Getting the word out

Quirky scheduling is the byproduct of the Pac-12’s $2.7 billion television deal with ESPN and Fox, but Tuesday-night games are a rarity in the conference.

“It’s an unusual circumstance here with a Tuesday-night ballgame,” Altman said. “It’s never happened. So on the way back from the office last night, I just walked through campus and made sure everybody knew it was a Tuesday-night game and tried to get as many students here as possible.”

Buffs have work to do

Most NCAA tournament projections include Colorado (20-9, 9-7), but the Buffaloes have lost their past two games and they finish the regular season on the road in the Bay Area.

Colorado is 4-7 on the road, but it hasn’t beaten a team with a winning record outside of Boulder this season. If the Buffs don’t reverse that trend, they will ride a five-game losing streak into Selection Sunday.

“We feel like if we can get this one against Stanford on Wednesday, it’s going to help us,” coach Tad Boyle said. “If we don’t get it, it’s not necessarily going to hurt us but you hate to be sliding as you come down the homestretch.”

Carson isn’t the only underclassman expected to leave school early to enter the NBA draft, but he has been the most vocal about his intentions.

• Oregon State’s Roberto Nelson averages 20.6 points per game and will likely win the Pac-12 regular-season scoring title. The senior has 578 points, 52 ahead of Oregon’s Joseph Young. UCLA’s Anderson is tops in assists with 190, 22 more than California’s Justin Cobbs.