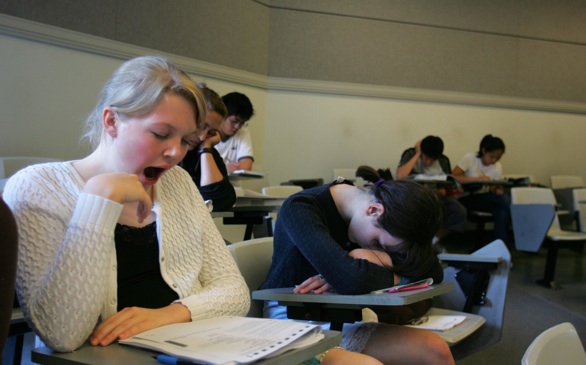 No longer will prospective college students have to spell prevaricator or sagacious; essays will be optional; and sales of pencils could take a nosedive.

The SAT exam is about to undergo sweeping revisions, College Board officials announced Wednesday.

The changes, the first since 2005, include removing penalties for wrong answers and focusing on a few areas of math, such as algebra, rather than testing a wide range of math concepts. The essay portion no longer would be mandatory.

Perhaps the most anticipated change for students is that they finally will be allowed to take the exam on a computer instead of filling in those little circles with a sharpened No. 2 pencil.

Overall, the update is aimed at making the SAT more reflective of what students learn in high school and the skills they need to succeed in college, officials said. And also to more closely resemble the now-more-popular ACT, the other admissions test exam.

The SAT should offer "worthy challenges, not artificial obstacles," said College Board president David Coleman in remarks prepared for delivery at an event in Austin, Texas.

The changes will take effect in 2016. The exam will continue to test reading, writing, and math skills, and scoring will be on a 1600-point scale, with a separate score for the essay.

Becky Bowlby, Lower Merion School District's college access counselor, said she was glad that the essay will not be compulsory, since many colleges don't require it, and that points will not be deducted for wrong answers, which discouraged guessing.

Most encouraging, she said, is that the College Board is partnering with Khan Academy to provide free test preparation materials, and that low-income students will receive four fee waivers for results that are sent to colleges.

"It levels the playing field," said Bowlby, who was director of admissions at Immaculata College before coming to Lower Merion.

Matthew Joseph, founder of MJ Test Prep in Bryn Mawr, said the SAT has been criticized for testing vocabulary and skills "that don't really correlate to college performance."

Moreover, removing the essay makes the SAT more competitive with the ACT, whose essay is optional, and gives students who are afraid of writing the choice of taking either test.

"A timed essay assignment for many people is a daunting task," Joseph said. "We see terrific writers who do not do well."

The essay will be changed in other ways, measuring students' ability to analyze and explain how an author builds an argument. Critics have contended that the test measures the coherence of the writing but not the quality or accuracy of the reasoning.

Also, some obscure vocabulary words will be replaced with words such as synthesis and empirical, which are used more widely in classrooms and work settings.

Seppy Basili, vice president of Kaplan Test Prep, one of the nation's largest test-preparation companies, said the updates are "good and smart" and that "a test that reflects what students do in school will make a big difference."

Coleman said in October, when he became president, that the SAT could be improved -- and likely become more competitive with the ACT. More than 1.66 million students took the SAT last year, the largest number of takers in history. But in 2012 the number of students taking the ACT surpassed the SAT for the first time, in part because it was taken by almost every junior in 13 states as part of those states' testing regimen.

Coleman said that "by changing the exam's focus, we change the learning and work the SAT invites. Today, many students who are terrified they will be tested on lots of SAT words have one resource: flash cards," Coleman said. "Every educator knows flash cards are not the best way to build real word knowledge, but when the SAT rolls around, they become the royal road. Students stop reading and start flipping."

For all the changes, Bowlby reiterated what high school students hear time and again from teachers and admissions counselors.

"The single most important thing is how well a student does in their classes," she said. "The rigor of the course and how well they do."

This article contains information from the Associated Press.