Squash Your Roommate Drama: Learn from these stories and live in peace with your roomie.

By Diego Girgado and Blanca Palacios 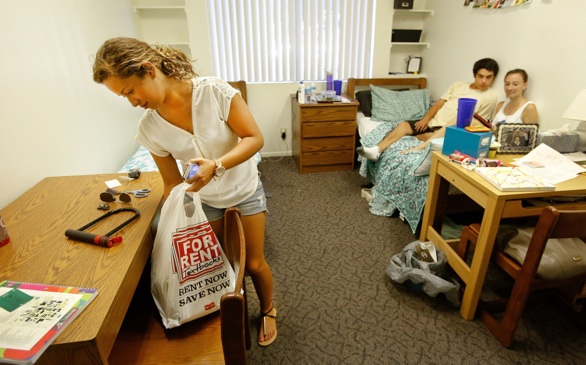 Living with a roommate can be tough at first, but communication can be the fix-all!
(Credit: Mel Melcon/Los Angeles Times/MCT)

Roommate drama is nothing new to many college students, but learning how to resolve the issues before the situation escalates to the breaking point is essential.

Here are some common roommate issues that can easily be avoided. After all, college is supposed to be fun – getting caught up in roommate drama isn’t.

Issue 1: Members of the Opposite Sex Coming Over

Situation:
Jane did not like the fact that her roommate, Emily, would bring guys over without her knowledge or approval. Even though she had a problem with this, Jane decided not to tell Emily. About a month into the semester, Jane walked in on Emily doing the nasty with her then-current boyfriend, Eric. Jane couldn’t believe what she saw: Emily and her boyfriend were having sex in Jane’s own bed! Emily and Jane then had a screaming match, which ended with Emily moving into the room next door. They are now on speaking terms, since they have to use the same bathroom.

Solution:
Jane should have been honest with Emily in the first place and set some guidelines for her. Maybe they could’ve agreed that guys could come over every other weekend when Jane is out of town or during certain hours on certain days. Emily should’ve have just asked Jane if she could bring guys over and at the very least text Jane when she was “occupying” the room.

Situation:
April and her roommate, Britney, were the best of friends until Britney’s constant partying and drug usage was too much for April to handle. Britney always had guys over at all hours of the night, and April was okay with it at first – but then Britney started smoking pot in their room when April wasn’t there. The fire alarm started going off, and April had had enough. She moved out. Britney and April aren’t friends any more, and Britney still has not changed since April left.

Solution:
April and Britney’s situation could have easily been avoided if the two just agreed on keeping the drugs and alcohol outside of the room. Britney should have told April about her active lifestyle since some people are not comfortable being surrounded by drugs and alcohol. If she insisted on still doing drugs and drinking, she could’ve found another place to do it.

Situation:
Sam roomed with Eddie, an outgoing student who prefers his music loud and sings for what seems like every moment of his life. Four in the morning would roll around and Sam was trying to fall asleep, but Eddie was still singing Lady Gaga at the top of his lungs. Sam, who was clearly annoyed at this point, started screaming at Eddie, telling him to go to bed. They both got into a heated argument and said things they both shouldn’t have said. The altercation escalated, and their resident advisor (RA) had to eventually interfere.

Solution:
Although Eddie has the right to sing at any time of day he wants, when you’re living with a roommate you have to take their needs into consideration. Instead of getting angry at one another, they should have set rules for “quiet hours” inside their dorm. This will please both sides, because Sam would get to sleep at night and Eddie could sing all day if he wanted to.

Situation:
David and Charlie were good friends, but David had a problem with keeping his stuff on his side of the room. One day, Charlie walked into the room and found David’s stuff scattered on the floor. Charlie confronted David about the mess, but David made an excuse about how he was in a rush and didn’t have enough time to clean up.

Solution:
This situation ended on a more positive note. David now has a two-hamper system: one for dirty clothes and one for clean clothes that need to be hung up. Now, the room stays clean, and David has learned how to be a more organized person.

Situation:
So, you came to college not knowing whom you would be dorming with. The thought of living with a stranger was appealing to you, until you found out that your roommate was mean and intolerable. The comments he made were rude, and the way he spoke down to people was not acceptable in your book. You spoke to him multiple times about his behavior, but he still came ranting to you, gossiping and bad mouthing people you have to see on a daily basis. His bad attitude just drained the energy right out of you.

Solution:
Yes, you might live with him but you don’t necessarily have to like him. His behavior is below your standards, and you should not have to put up with that. College is stressful all on its own, and adding useless drama to your life is a waste of energy. The solution to this problem is easy: cut all ties. Put in incident reports to your RA, and move away from the ever-consuming vortex.

TIPS ON GETTING ALONG WITH YOUR ROOMIE

Living with a roommate can be tough. More often than not, you and you’re roommate(s) aren’t exactly best friends. You don’t have to be friends with him/her, but you should be able to get along and perhaps form some type of friendship. Here’s how you can do that:

1. Write Up a Roommate Agreement Form: If your RA didn’t already help you with this, do it yourself. Write down things such as a chore responsibility list, what time you prefer to have the TV or lights on, your music volume preference, study hours, who should buy toilet paper for the apartment, and when members of the opposite sex can come over. Have all of the roommates sign it, and post it on the fridge or bulletin board as a reminder.

2. Plan Weekly/Monthly Bonding Sessions: This can be as easy as getting coffee every now and then, having a “family” dinner or just watching a favorite TV show together. This way, you can bond and start to see your roommate as an acquaintance or friend – not just a random stranger who doesn’t know how to buy toilet paper when they run out.

3. Don’t Spend Too Much Time Together: It might seem contradictory to #2, but this just means have a balance in the amount of time you spend with your roomie. If you do everything together and live together, you’ll end up getting sick of them and wanting space. Have a life outside of your dorm or apartment.