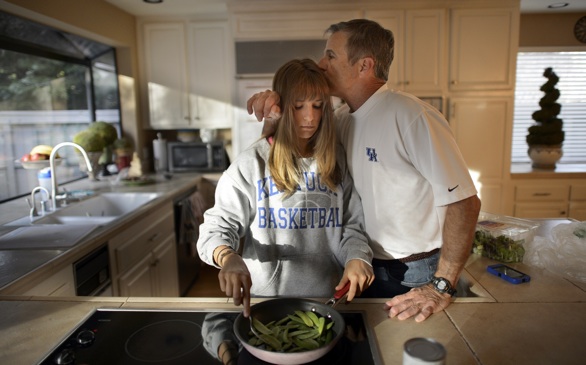 Instead of putting a strain on their relationship, college actually brings them closer.
(Credit: Paul Kitagaki Jr./Sacramento Bee/MCT)

Leaving the nest for college is a new phase for most freshmen. No longer living with parents and spending less and less time with family members seem like a violation of children’s intimate relationships with their parents.

However, after talking to several students it actually seems that being physically far away from home does not mean students are mentally and emotionally separated from their parents. In fact, the distance between home and campus actually increases college students’ feelings of parental closeness.

In addition, such feelings of parental closeness are characterized by two seemingly contradictory actions—the desire to be independent and the desire to frequently connect with parents.

For Alex Penuelas, a second-year student whose home is a one-hour drive from UCLA, being an independent college student does not sacrifice his close relationship with his parents. Living in a college dorm for almost two years, Penuelas still goes home occasionally.

“I can go home every week, but I choose not to,” he said. “I don’t want to rely on my parents. I want to be more independent.”

For many college students, living away from parents is a necessary step to gain independence. However, deliberately not going home very often does not mean students like Penuelas want to alienate from their parents. “To be honest, I miss them, so I talk to them on phone at least once a day. Our topic is basically our daily routine and it never ends,” he said.

Next year, Penuelas is planning on moving to an apartment, which is cheaper than a dorm, and he likes his current way of communicating with his parents. For him, spending less time with his parents does not alienate him from them; it just helps him gain independence.

Apart from gaining independence, leaving the nest for college has proven to even strengthen the relationship between a student and his or her parents. Take Isabella Clarkson, for example.

The Texas native has been at UCLA for two years now, and she only goes home every 10 weeks. Still, she never feels that she is apart from her parents. “They are there, a phone call away,” said Clarkson.

Clarkson has found that her relationship with her parents has even been elevated to some extent. “My family anchors me in a way that I didn’t see in high school,” she said. Her parents no longer help her with stuff such as laundry, meals, or setting alarms.

Instead, the UCLA Bruin said, “they ground me and try to steer me in the right direction—they know me better than I know myself sometimes and a second opinion from people you can trust is a rare gift.”

When asked to rate her relationship with her parents on a scale from one to five (one being not close and five being very close), she rated three for high school and five for college. For a young woman who goes to college in another state, leaving her parents increased her closeness with them.

Additionally, her parents’ role gradually changed into a supporter or adviser. They no longer help her deal with the trivial things in life, but they give her valuable suggestions about how to live by herself.
Similar to Clarkson’s relationship with her parents, Chang Liu also has experience a strong feeling increasing closeness with her parents.

“Attending college brings my parents and I closer than ever before, ” says Chang, an international student at UCLA. “When I was in high school, I went home everyday, and I often had conflicts with them, so I desperately longed for a departure from their supervision. But when I am really away, I miss them so much.”

When talking about how often she connects with her parents, she said, “I constantly send random life-update messages to my parents. I never thought I could have so much to say with them.”

Liu realizes that family has become more important in her life after she went to college. She also knows that she has been growing up rapidly in these past two years.

“I definitely became more independent than before,” she said. “I manage my own bank account, I look for apartments by myself, and I send my car to an auto-repair shop for maintenance regularly. At first, I have to do these simply because my parents are not in America. But not I enjoy making decisions by myself. I go home only twice a year but I would like to keep that frequency.”

Being far away from home improves Chang’s relationship with her parents and (like Penuelas) provides her a great opportunity to gain independence.

These students’ stories are not part of an individual phenomenon. Some empirical evidences indicate that the feelings of parental closeness actually increase following departure from the family.

Based on this theory and the previous three stories, it’s not a surprise that the farther students live away from home, the closer relationship they have with their parents and more independent they become.