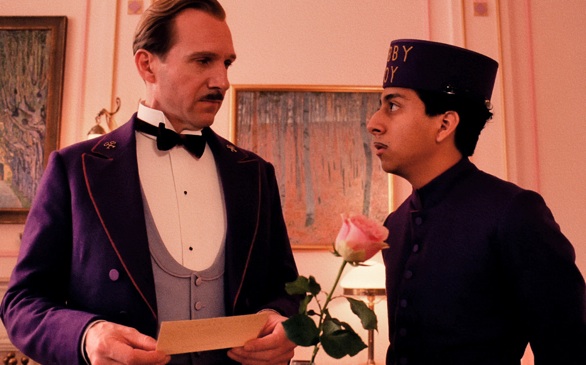 Revisiting the world of Wes Anderson is like opening a scratch and sniff book. You see a piece of pretty, something that’s been staged for you, and you think you’ve grasped its purpose.

Like a fruit and its smell, Anderson can’t help but ooze what’s within: color and precise execution. However, what you don’t anticipate in his films are the feelings that his images conjure.

Despite his particularity and his deliberate, precise placement of camera, actor and prop, Anderson simply does not see himself as a calculator of meaning; he simply creates because he feels. His process for his latest film, the masterfully crafted comedy with severe dark twists The Grand Budapest Hotel, is no different.

The story is set on the mountainside of the quaint Republic of Zubrowka, the home of a hotel that surpasses all the rest in magnificence and hospitality: the Grand Budapest Hotel. The ever-so-dedicated concierge and old lady charmer, Monsieur Gustave, prizes the propriety of his staff and hotel above all else, until his most beloved senior mistress Madame D. (Tilda Swinton) dies curiously and unexpectedly.

When she bequeaths to M. Gustave her most priceless item, her family turns on him, eager to get their hands on the treasure, and is willing to destroy him at all costs to get it. However, what they don't know is that Gustave's precocious new lobby boy is willing to do anything to save M. Gustave and the hotel. Even risk his life.

The Grand Budapest Hotel’s concept evolved over several years based on numerous inspirations—people, books and music—entering Anderson’s life. It began about six years ago when he sat down with his friend, illustrator Hugo Guinness, to construct a character based on someone they knew. Throughout the years, this character would transform into Monsieur Gustave, the most loyal concierge of the most prestigious hotel in all of fictional pre-war Eastern Europe. However, M. Gustave was not always intended to be so.

“We couldn’t really figure out what happened next,” said Anderson. “It was set in the present, and there was no hotel, and he wasn’t a concierge or anything. It was only many years later that I became interested in Stefan Zweig’s work, which I had never read before, and I had the thought to try to do something Zweig-like… Suddenly we seemed to have all the key ingredients. We then wrote the thing very quickly after that.”

For many of his films, Anderson often writes characters with actors in mind, and for The Grand Budapest Hotel, there was only one man who could play the part. As soon as he started to sink his teeth into M. Gustave’s character, the identity of the actor soon cleared through the fog: Academy Award-winner Ralph Fiennes.

Just like all of his past films, Anderson fills his latest coloring book with familiar faces at every turn. Even the most minor roles seem to have been filled by an Oscar-nominated veteran. The film’s charm, however, lies in the hotel’s unknown inhabitants.

When Tony Revolori heard that Anderson was avoiding holding auditions in the States for the co-star position across Fiennes, he figured he should move on to the next opportunity.

But after an unsuccessful manhunt around the globe, Anderson returned to trusty Los Angeles to find two brothers that were worth the home journey. Tony and his older brother Mario found themselves as the finalists for the part, and despite Mario’s meatier résumé, Tony snagged the role of a lifetime: Zero, the lobby boy.

When asked how Mario handled losing the part, Tony joked, “It was good, you know, I broke his arm, he broke my leg, but it was fine. No hard feelings.”

A precocious 17-year-old with a photographic memory and described by Jeff Goldblum as “a young Ralph Macchio,” Revolori stumbled into the mix of Anderson’s usual arsenal of actors and crew – Jason Schwartzman, Bill Murray, cinematographer Bob Yeoman, production designer Adam Stockhausen – along with new additions that add even more star power to the engine: Harvey Keitel, F. Murray Abraham and Jude Law.

Revolori relished the idea of catching his big break with a director “who can do what he wants and get what he wants no matter what; no studios, no producers telling him ‘we don’t have the money.’”

Unsurprisingly, Anderson came to set with ideas fleshed out, miniatures in hand, and, according to Goldblum, animatics — “this moving animated storyboard that had all the shots in the storyboard, pretty much, and the cuts and everything and when there was dialogue he was voicing all the parts.”

Forming the habit after Fantastic Mr. Fox, Anderson arrived in Germany (where The Grand Budapest Hotel was shot in its entirety), with a specific vision that he rarely strayed from. In rehearsals, if there were an article missing in the dialogue, he would correct it. But none of the actors, including Goldblum who trained in improv, find Anderson’s directing style suffocating, strict or limiting.

“I wouldn’t call it rigid; I’d call it specific, which is one of the most important words in the theatrical dictionary. It’s what you want… It’s creatively inflaming and inspiring to be part of something that works as a whole,” said Goldblum.

And this whole, this Grand Budapest Hotel, uncovers a first in Anderson’s storytelling.

Instead of focusing centrally on the dysfunction of a familial unit in some way, The Grand Budapest Hotel is about what we do in the absence of family. Our heroes, M. Gustave and Zero, are orphaned in respective ways, and both have found refuge in this lavish, beautiful hotel. They fill that void of family, which Anderson usually sets center stage, with friendship. By doing so with the usual flare of mayhem, destruction and love, Anderson creates something rich—a new smell if you will, that is oh-so sweet.