300: Rise of an Empire Likely to Top Mr. Peabody & Sherman at Box Office 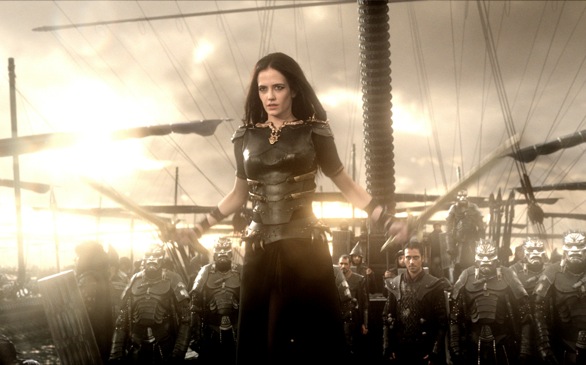 Eva Green as Artemisia in 300: Rise of an Empire.
(Credit: Courtesy of Warner Bros. Pictures)

LOS ANGELES — An army of ancient Greeks is poised to beat a preternaturally smart cartoon dog at the box office this weekend.

300: Rise of an Empire, a 3-D sequel to 2007’s 300, is expected to gross about $45 million in ticket sales in the U.S. and Canada through Sunday, according to people who have seen pre-release audience surveys.

A $45 million weekend for Rise of an Empire would be considerably smaller than the first 300, which opened with a surprising $71 million domestically seven years ago. That movie went on to gross more than $456 million worldwide, including $245 million from theaters outside the U.S. and Canada. Rise of an Empire is also expected to do well overseas.

The follow-up is more expensive than the 2-D original. Rise of an Empire was co-financed and co-produced by Warner Bros. and Legendary Pictures for $100 million.

The 300 from 2007 was based on the graphic novel by Frank Miller and Lynn Varley about a small group of fighters who attempt to battle overwhelming Persian forces. It cost about $65 million.

The new visual-effects-heavy action film, directed by Noam Murro, features a different cast. It follows the Greek general Themistokles as he takes on Persian fighters led by man-turned-god Xerxes and his ally Artemisia.

Zack Snyder, who wrote and directed the original, is a writer and producer for Rise of an Empire.

Mr. Peabody & Sherman, which is getting distribution from 20th Century Fox, cost $145 million to make.

Its projected $30 million weekend would be somewhat better than the debut of Dreamworks Animation’s summer misfire Turbo, which resulted in a $13.5 million charge for the company. Dreamworks’ successful 2013 animated feature The Croods opened with $44 million in March.

Based on the Jay Ward-created characters that appeared in the Rocky & Bullwinkle cartoon show that reached its peak popularity in the 1960s, Mr. Peabody & Sherman follows a hyper-intelligent, time-traveling canine who adopts a young boy as his companion.

The film has received generally positive reviews as of Thursday, but it faces kid-friendly competition from The Lego Movie and Frozen, both of which landed in the top 10 last weekend.

In limited release, Fox Searchlight is introducing quirky director Wes Anderson’s latest film, the well-reviewed Grand Budapest Hotel, in four theaters in New York and Los Angeles on Friday. The company plans to expand the film’s reach over the next few weeks.

Fox Searchlight is also expanding Oscar winner 12 Years a Slave into about 1,000 locations starting Friday, up from about 400 a week ago. The film won three Academy Awards on Sunday, including best picture.