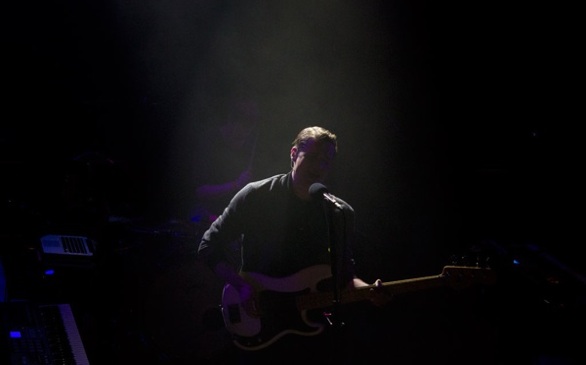 Fast forward almost two and a half years later from that night at Echoplex, and the band’s following in California has only continued to grow stronger. Thursday night’s sold-out show at the Troubadour was all the evidence you needed to know that Wild Beasts rightfully belong in L.A.’s daunting music scene.

So, when it was time to dim the house lights and turn on the mics, the boisterous crowd emphatically welcomed the foursome — Tom Fleming (bass, vocals, guitar, keyboards), Hayden Thorpe (vocals, guitar, bass, keyboards), Ben Little (guitar, keyboards) and Chris Talbot (drums, vocals) — with loud hoots and hollers as each of them descended down the staircase to their designated positions on the stage.

Wild Beasts were quick to show their appreciation as the applause continued, but you could tell from each of the band members’ faces that the cross-country flight from NYC to L.A. had worn on them. Right now there’s not much time for rest and relaxation, as this weekend they’ll be in Mexico City before heading back to their homeland for a string of shows throughout the U.K.

The band’s current world tour, after all, is in support of its new album Present Tense, which has only been out for a little more than a week. But when Wild Beasts opened its 75-minute set with Fleming delicately singing the opening lines to “Reach a Bit Further” off 2011’s Smother, you could tell from the buzz in the room that this was going to be a special night for these four childhood friends. In fact, it only took a few songs before Fleming was sipping a craft beer from one of the audience members standing next to the stage.

Playing more than half of Present Tense in total, Wild Beasts infused plenty of life into its slower, gloomier songs such as “Pregnant Pause” and “A Dog’s Life.” And though it was expected that we would hear its new single “Sweet Spot” at some point during the night, one of the highlights at the Troubadour was undoubtedly hearing “Daughters,” the chilling track on Present Tense that sees Fleming vividly depict an apocalyptic world with lyrics like “daughter, please / spare me / old men's voices screaming / and soon we'll see / what you really mean / all the pretty children sharpening their blades / where my daughter passes only ruins remain.”

It wasn’t long after that the band doled out fan favorites “Hooting & Howling” and “This Is Our Lot” from 2009’s Two Dancers before heading back to the dressing room.

In this day and age, what makes Wild Beasts such a unique band is not only that Fleming and Thorpe can alter their voices to sing the band’s baritone and falsetto parts, but they can also switch between guitar, bass and keyboards — the two Brits regularly exchange instruments in between songs during their live performances.

Yet, even with its set break coming less than an hour after stepping on stage, Wild Beasts made sure to save its best for last.

Opening the encore with their first single off Present Tense entitled “Wanderlust,” the 2010 Mercury Prize nominees delved into some of their older material shortly thereafter, taking things up a notch by unleashing “All the King's Men” and “Lion's Share.” The final songs were a reminder that while Present Tense may be the direction Wild Beasts is headed in right now, it also hasn’t forgotten what got it here.