The Glitch Mob to Bring 'Adventure Dance Music' to Coachella 2014 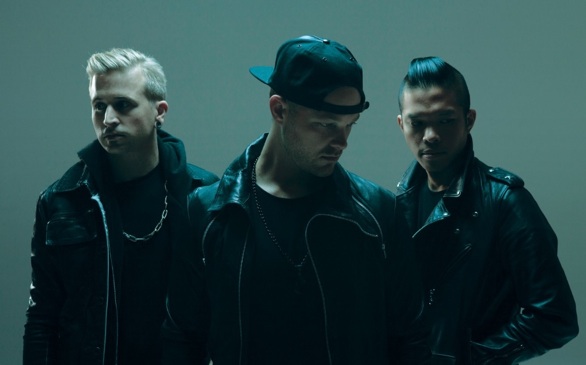 The Glitch Mob originated in L.A., when it was originally a five-member group.

Ah yes, spring is almost here. The sun is shining brighter, the days are longer, the birds are chirping, and oh yes, it’s Coachella season. You’ve probably got your wristband already, and if not, you’re probably scheming to nab one from either a friend or a stranger on Craigslist.

Once you get there, you’re probably fixing to get yourself a good dose of some electro. Some heavy bass lines maybe? Perhaps some kind of far out, trippy, chest-rattling, dubstep-y speaker noise to compliment that gorgeous desert backdrop? If any of this is ringing true, you probably already know where you’re going to be both Friday nights (April 11 and 18): you’ll be in the crowd watching the Glitch Mob, and you’ll probably have your mind blown.

“We’re really grateful to be playing Coachella,” said Glitch “Mobber” Edward Ma during a recent interview with Campus Circle. “I think for any artist, being able to play in the Sahara tent is a high honor.”

No stranger to the West Coast festival scene, the Glitch Mob has been a Coachella regular for years. Beginning in the early 2000s, when the festival was still in its infancy, the trio started as guest DJs for the Do Lab, back when the Do Lab was still so new that it wasn’t even in the center of the festival.

The Glitch Mob used its Coachella exposure to grow a little bit more every year. By 2010, the group had grown out of the Do Lab stat and moved to the bottom of Sunday’s lineup. This year, the Glitch Mob returns to the Coachella lineup – only this time, we them billed on the third line alongside notable acts such as HAIM, AFI and Bonobo.

At the time of our interview, the three-piece was expecting its set to take place in the Sahara tent. However, a source from the group’s production staff more recently said that the group is considering moving its performance to the Mojave. Why you ask? Because the stage has more room. It's deeper, and a little bit wider. The Glitch Mob can fit its whole setup there, including audio and visual equipment. If it were in the Sahara, the group would likely be confined to a just table on top of a platform.

“We’re just trying to make a full Glitch Mob experience, everything from the visual content to the instruments that we play, to the custom crafted sets,” said group member Justin Boreta. “Every element is important to us, and we have our hands in almost every element of the Glitch Mob. It’s more than just us making music; it’s a lot of things.”

A Glitch Mob performance in the Mojave tent would potentially be far superior to one in the Sahara. Aside from having the full audio and visual experience, the Mojave tent would also provide a more intimate setting, one where the crowd would be comprised of people who actually follow the group, whereas any performance in the Sahara tent will have a default crowd of twitching ravers who don’t leave that one stage for the entire weekend.

The group agrees the crowd has a lot to do with their overall performances. Glitch ‘Mobber’ Josh Mayer, aka Ooah, said, “The way that we look at it is: although in the literal sense the three of us are technically ‘the Glitch Mob.’ But the Glitch Mob really is all the fans out there and all the people out there that help create the Glitch Mob experience. I think that another way to look at it is, we are merely the facilitators that help to tell everybody’s collective story.”

The Glitch Mob is going to be touting material from its new album Love, Death, and Immortality. Boreta describes the album as "adventure dance music."

Musically, Love, Death, and Immortality is pretty intense; it’s deep and aggressive. Selected tracks from this album should make for a high-energy performance. Edward Ma, aka edIT, puts it more eloquently: “If our last album was introverted, this next album is extroverted.”

Fans are definitely anticipating the Glitch Mob’s upcoming performance and so are electro aficionados that are merely familiar with the name. The group has been doing work throughout the California electro scene for years, and the three have definitely paid their dues. More than just about anyone on Friday night’s lineup, this is a group that absolutely deserves to be there.

“It’s a dream come true, we’re extremely grateful,” said edIT. “And you know, really it would only be possible with all the love and support of our fans.”

The Glitch Mob will be playing Coachella on Friday, April 11 and 18.