300: Rise of an Empire Tops Mr. Peabody at Box Office 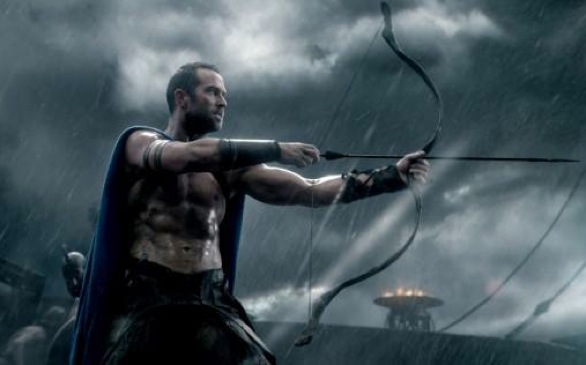 LOS ANGELES — The bloodthirsty forces of 300: Rise of an Empire proved victorious at the box office on its opening weekend, easily surpassing the family-friendly animated movie Mr. Peabody and Sherman.

Rise of an Empire, a 3-D sequel to the 2007 movie 300, grossed an estimated $45.1 million in ticket sales across the U.S. and Canada to take the No. 1 spot at the box office. The film, based on a graphic novel by Frank Miller and directed by Noam Murro, follows the battle between ancient Greek warriors and their Persian foes.

The first 300 movie was a surprise success when it was released seven years ago, bringing in a domestic total of $211 million. Like its predecessor, Rise of an Empire uses extensive visual effects to replicate the highly stylized, dream-like look of Miller’s book.

The film drew mostly young men. More than 60 percent of audiences were male and under 35.

“Young males really went for it in a big way,” said Jeff Goldstein, an executive vice president at Warner Bros., which distributed the film. He said more women turned out for the movie than its predecessor, thanks to a new female character played by actress Eva Green.

The R-rated movie, which cost an estimated $100 million to make, was unenthusiastically received by critics. It earned a “B” from audiences, according to polling from Cinemascore.

Rise of an Empire displaced the Liam Neeson action-thriller Non-Stop, which fell to the No. 3 spot with $15.4 million. The Universal Pictures release has so far grossed $52.1 million domestically.

Mr. Peabody, a Dreamworks Animation movie that was released by 20th Century Fox, grossed an estimated $32.5 million domestically on its opening weekend to take the No. 2 spot. The 3-D movie follows an entrepreneurial canine and a young boy on their time-traveling adventures.

The movie received a Cinemascore rating of “A” and earned generally positive reviews from critics.

“It went up 81 percent on Saturday, which indicates that families have really come out strongly. It has great playability,” said Chris Aronson, president of domestic distribution at Fox.

On the heels of winning the Academy Award for best picture last week, 12 Years a Slave expanded to more than 1,000 screens, grossing about $2.2 million for the weekend to take the No. 9 spot. Its domestic haul stands at $53.1 million.

The Fox Searchlight release won a total of three Oscars and was released on DVD on Tuesday.

The Lego Movie took the No. 4 box-office spot with $11 million, bringing its domestic total to $225 million after a month in cinemas. Son of God, the New Testament movie that opened last week, saw its weekend grosses drop by more than 60 percent, finishing at No. 5 with $10 million.

Wes Anderson’s The Grand Budapest Hotel opened Friday in limited release on four screens in New York and Los Angeles. The Fox Searchlight movie grossed an estimated $800,000 for a whopping per-screen average of $200,000.

The director’s last feature, Moonrise Kingdom, bowed in 2012 with a per-screen take of $131,000 on its opening weekend.

Budapest, starring Ralph Fiennes as the debonair manager of a European hotel, received glowing reviews from critics and has benefited from strong word of mouth. It is scheduled to go wider to 65 to 75 theaters starting next weekend, according to Frank Rodriguez, head of distribution at Fox Searchlight.