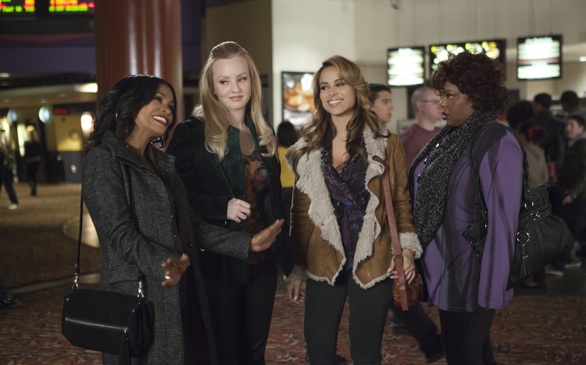 Single moms clubs are bound to start popping up everywhere after Tyler Perry’s newest movie, The Single Moms Club, is released this week. In Perry's newest film, we’re introduced to a fresh comedic dynamic from the famed director.

The dramatic comedy revolves around the lives of five independent women, who (as you’ve probably already guessed) are single mothers. The women come from different walks of life, but they do have one thing in common: their children are mischief-makers.

Brought together by their combined efforts to get their kids out of trouble at a prestigious private school, the women form relationships with one another that only single, hardworking mothers could understand. Even though each woman has a story consisting of unique problems and different racial/societal backgrounds, they are emotionally connected through their need for each other’s love, appreciation and support.

Perry is known for writing, directing, producing and acting in tons of black comedy films. His most well known franchise – the Madea films (The Diary of a Mad Black Woman) – is based on a strong, independent and outrageously feisty grandmother. At a recent press conference, the comedic quadruple threat explained he has always admired hardworking single moms and independent women in general, thus being the reason why he oftentimes displays his gratitude for them on the big screen.

“[The women in The Single Moms Club] are coming together to make a village for each other. My whole point in the movie is to find your village if you need it,” he said. “If you don’t have that father figure in your life, you have to create it.”

Aside from the fact that Perry is admired for his appreciation for strong and caring women, he is also recognized for casting the most hilarious and outrageous ensembles. The director explained he writes his screenplays, develops the characters and literally pictures the faces of who should play whom.

There’s no doubting his keen eye for choosing talented actors and actresses, as The Single Moms Club includes an assortment of some of Hollywood’s bests: Amy Smart, Nia Long, Cocoa Brown, Wendi McLendon-Covey, Zulay Henao, and funny man Terry Crews. The actresses and actor expressed their gratitude for Perry’s directing techniques as they explained his easy-going, understanding and, most importantly, encouraging directing methods.

When asked about her experience working with Perry, Smart said, “[Perry] not only has an ear for comedy, but he’s a deep person, too. He really picks and chooses the scenes that matter. In the scene where I really talk to my daughter, he took me aside and told me that I’m a woman who has been out of touch with my kids for such a long time.”

Not only did Smart find the atmosphere on set to be light-hearted and enjoyable, but Long – who plays Perry’s girlfriend in the movie (lucky him!) – expressed her gratefulness for his advice and encouragement on set as well.

In regards to her on-screen relationship with Perry, Long explained, “It was weird when I’d be in the scene with his character and all of a sudden he’d yell ‘cut!’ But Tyler is brilliant at multitasking, and at the end of the day he is so honest with the way he develops the women characters. Women love Tyler because he understands them and the adversities they must face.”

The Single Moms Club isn’t as dramatic as it may seem, as McLendon-Covey and Brown have a hilarious relationship and, as always, Crews makes sporadic cameos that will have audiences dying of laughter.

“I was always the class clown in school,” said Crews when asked if he has always been the “funny guy” growing up. He’s a bundle of joy and amusement in the film, as he relentlessly seeks the attention of Brown’s character, which is quite like Madea in The Diary of a Mad Black Woman.

Although the movie starts out with five very different women who don’t understand each other and don’t really care to, it develops into a story about five true friends who help pick each other up when the going gets tough. “[The women] are all from very different backgrounds, but they all need the same thing, [which is] just support,” said Perry. His main goal with The Single Moms Club is to motivate single mothers who may feel a bit confused, lonely and dejected at times.

But wait a minute – what about the dads? Will there be a Single Dads Club?

“Well…” said Perry, “The Single Moms Club has to see some success before I even think about that.”

For now, moviegoers can catch Perry’s latest when it opens in theaters Friday, March 14, 2014.