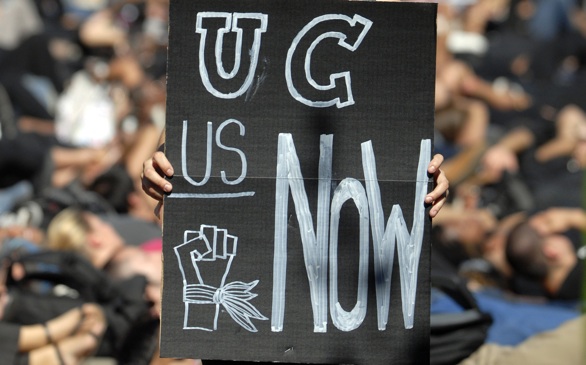 Students their support for Senate Bill 185 at the University of California in 2011.
(Credit: Kristopher Skinner/Contra Costa Times/MCT)

California voters may once again be asked to decide whether public universities should be able to use race, ethnicity and gender in admissions if state lawmakers succeed in placing on the ballot a constitutional amendment to change Proposition 209.

It has been illegal for universities to take into account an applicant's demographics since 1996, when voters approved Prop. 209 to prohibit public institutions from "discriminating against or granting preferential treatment" to any group or individual in hiring, contracting and college admissions.

The law's most obvious impact has been a 49 percent plunge in admission offers to black students from UC Berkeley, and a 16 percent drop in offers from UCLA, the University of California's flagship campuses.

Now state lawmakers are considering SCA5, a constitutional amendment for the November ballot that would give voters a chance to amend Prop. 209 to restore racial and gender preference in college admissions.

The state Senate approved the legislation Jan. 30 along party lines, with Democrats providing the two-thirds majority required to put a constitutional amendment on the ballot. The legislation is now in the Assembly, where its fate is uncertain.

"I'm optimistic," said its author, Sen. Ed Hernandez, D-West Covina (Los Angeles County), who has tried amending Prop. 209 three times before. Twice he tried changing the law at the state level, only to have Gov. Jerry Brown and, earlier, Gov. Arnold Schwarzenegger veto the bills on grounds that voter-approved Prop. 209 represented the will of the people.

His earlier attempt to place a measure on the ballot never got out of the Legislature.

"It goes beyond ethnicity," he said. "It goes to gender. Say a campus feels there aren't enough women engineering students. They could not admit more" to try to balance the numbers.

Restoring affirmative action to public education "is equal opportunity for everyone," he said.

His legislation also comes as the U.S. Supreme Court is considering whether voters can ban affirmative action programs through ballot measures at all, though few expect the conservative court to reject that approach. The case concerns a law similar to Prop. 209 approved by Michigan voters in 2006, three years after the high court - more liberal at the time - said the University of Michigan Law School could consider demographics in admissions decisions.

In California, Hernandez's legislation has captured the interest of university officials and black students in particular, many of whom would like nothing better than to do away with Prop. 209.

"Coming from a private university where we didn't have that restriction, we had a lot more flexibility and could recruit the best possible class without the sense that referring to race was illegal," said Chancellor Nick Dirks of UC Berkeley, who was at Columbia University in New York before arriving last summer.

Like most UC campuses in the post-209 era, Berkeley evaluates applicants using a "holistic review" that considers qualities beyond academics: extracurricular activities, of course, but even tenacity, character and "insight."

And yet, Dirks said, "the number of African American students at Berkeley is still very low."

"Today it is clear that we have suffered for it," Chancellor Gene Block wrote of Prop. 209 in an open letter last month to the UCLA campus, where black enrollment is only slightly higher than at Berkeley. But the legislation has also ignited fiery opposition, mainly among Asian Americans.

"I think the effect it'll have on Asian Americans in the universities is their numbers are gonna go down," Senate Minority Leader Bob Huff, R-Diamond Bar (Los Angeles County) told a room packed with opponents of SCA5, almost all Asian Americans, on March 3 in Cupertino. "Why in the world do they have to put race in there?" he said to rock-star applause and cries of "Yes! Yes!"

Yet it's not clear that the number of Asian Americans would drop if affirmative action were reinstated. In fact, the rate of admission offers to Asian American applicants to UC rose higher in the years before Prop. 209 than after.

Yet more than 93,000 people, most with Asian names, have signed a petition urging the state Assembly to reject SCA5.

"I have a dream that my four little children will one day live in a nation where they will not be judged by the color of their skin, but by the content of their character," one of the signers, Wei Zhang of Fremont, wrote using Martin Luther King, Jr.'s best-known quote to suggest that affirmative action is discriminatory.

A scientist at UC's Lawrence Livermore National Lab, Liao started the petition drive on Feb. 16 and has watched with satisfaction as the number of signers has climbed faster than, well, UC admission offers to Asian Americans before Prop. 209.

"It's amazing! It's like wildfire!" said Liao, who called the admissions data secondary to the principle of the thing. "The law must be color blind. That's my take on this."

Marcel Jones, chairman of the Black Student Union at UC Berkeley, has a different take.

"I don't want to say affirmative action is a cure-all," he said. "But it's a practice that could be used to try to offset racial inequalities that still exist."

He said the poor quality of many schools in primarily black neighborhoods is an example.

And without diversity, everyone on campus suffers, he said, noting that some incident reflecting ignorance about students of color seems to occur every semester.

Most recently, he said, students hung a noose at their frat house across from the African American Theme Program, a resource for black students.

"So we have to have a deeper analysis of what affirmative action really means," Jones said. "It's not just trying to round up as many people of color, no matter what their qualifications are."

Campus News
California State campuses with most COVID-19 cases have one thing in common – they like to party
1,291 views