As Pac-12 Tournament is Set to Open, Coaches Think Ahead 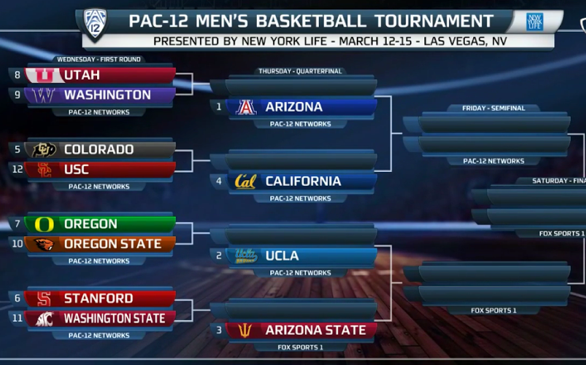 LAS VEGAS -- This could be a referendum on Pac-12 Conference Commissioner Larry Scott's vision.

The NCAA tournament selection committee will sequester itself Sunday in something of a conclave of Cardinals that's more Louisville than Vatican City. When they emerge, 68 teams will have been chosen.

How many will be from the Pac-12? The answer largely depends on who is fielding the question.

Bill Walton says eight. But he has also been known to say things like Digger Phelps is the "devil."

Arizona Coach Sean Miller says seven. But that opinion came during a Pac-12 coaches' teleconference that had all the soft-sell of Alec Baldwin in "Glengarry Glen Ross."

However, it does seem there are more variables than usual this season, and the Pac-12 tournament this week is the last place it can be sorted out. Tournament play begins Wednesday with four games at the MGM Garden Arena. USC opens against Colorado at 2:30 p.m. UCLA has a bye into a Thursday quarterfinal, when it will play the winner of Wednesday's game between Oregon and Oregon State.

Conference coaches seem to be in agreement that in the end the Pac-12 will benefit from greater exposure generated by television agreements procured by Scott and his staff.

"I think with the new television contract, us being on different networks and being a part of the mainstream, a lot people have talked about our conference," Miller said.

If so, it isn't showing in the polls.

Arizona, the Pac-12's regular-season champion, is the only ranked team in the conference, at No. 4 in both the Associated Press media and USA Today Coaches polls.

As for the rest, UCLA, second place in the Pac-12 regular season, is a lock to make the tournament, and Oregon and Arizona State are thought to be near sure bets. Stanford and Colorado are wait-and-see teams, and California is a longshot. Any other team would have to win the Pac-12 tournament and claim the conference's automatic spot in the NCAA tournament.

The coaches have already been lobbying at least a week.

"This is the deepest, most competitive, well-balanced our league has been since I have been here," Arizona State Coach Herb Sendek said. "Our talent level is good. The coaching around the league is excellent. It is really a top-flight conference when comes to basketball right now."

The Pac-12 has been trying to emerge from a basketball recession in recent seasons.

The conference had the first NCAA champion, Oregon's "Tall Firs," in 1939. California, under Pete Newell, had a dominant program in the late 1950s. John Wooden's UCLA teams set the bar even higher. Arizona joined the national scene under Lute Olson in the 1980s.

UCLA and Arizona were the conference's highest seeded teams last season. Both were sixth.

Arizona reached the West Regional final in 2011, the furthest a Pac-12 team has advanced in the last five seasons. The five other power conferences have produced at least one team that reached the Final Four.

"We had a period where we were pretty down," Cal Coach Mike Montgomery said.

"We haven't had as many kids leave in one-and-done-type deals in recent years, so we're keeping some of our better players around," Montgomery said. "We've got a lot of good young coaches who are building programs. People are putting some resources into their programs."

Much of the resource money came from television deals that the coaches say raised the Pac-12's profile.

"Perception is reality," Oregon Coach Dana Altman said. "[Conference officials] have done a great job promoting our league, getting our league recognition. That has paid dividends for all of us."

Whether that pays off in NCAA berths will be known Sunday.

Arizona, the nation's top-ranked team for eight weeks, is 3-0; everyone else is 2-8.

And even Arizona now has issues as the tournament nears. The Wildcats have three losses in the 10 games since losing starting forward Brandon Ashley to a season-ending injury.

Colorado was ranked as high as 15th before leading scorer Spencer Dinwiddie was injured but have a 7-8 record since.

Oregon was undefeated and ranked 10th, then lost eight of 10 games during conference play. The Ducks are surging, though, having won their last seven games, including victories over Arizona and UCLA.

The Bruins may be the conference's most consistently inconsistent team. UCLA lost the second game on each of its four two-game trips. The Bruins finished regular-season conference play by losing, 73-55, Saturday to Washington State, a team that had three conference victories.

Cal may not recover from its tumble. The Bears finished in a five-way tie for third, but lost eight of their last 13 games.

"Every game in late February and early March, it's like you're under a magnified glass," Montgomery said.

The conference tournament is an all-important last look.