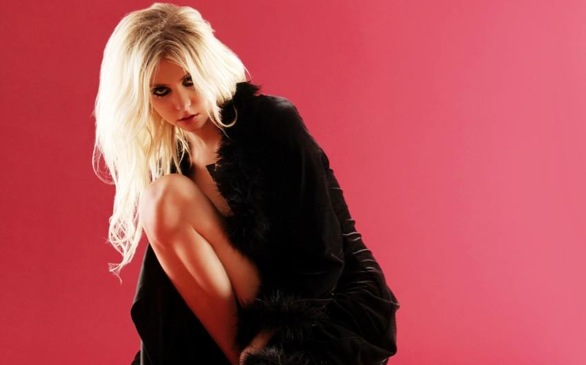 TAYLOR MOMSEN IS GOING TO HELL
Former “Gossip Girl” star Taylor Momsen is back in the news; she’s going to hell! Actually it’s her entire band, The Pretty Reckless, that’s headed to Hades as new album Going to Hell drops March 18. Ironically, the group had a devil of a time cutting the record; recording sessions were well underway when Hurricane Sandy destroyed the band’s studio, forcing them to start over from scratch. Fans are already rewarding the band’s tenacity though, and the music video for the album’s title cut has racked up several million views.Momsen has responded to the love by adding a live acoustic version of “Going to Hell” to the album as a bonus for fans. Limited edition first pressings of the CD will also include a pull-out poster. The Pretty Reckless is currently on tour in Europe with Fall Out Boy.

TRANSITIONS: A FREE COMPILATION FROM KID RECORDINGS
New York-based indie label Kid Recordings is offering a free download of its label sampler, a compilation called Transitions: Kid Recordings 2013 Mix-A Year at a Glance. Featured on the set are alt-poppers Folding Legs, Betty Black with an Aram mix of her “Fatality of Love,” Tommy Bones & Lydia Rhodes, representing twice with versions of “What I Feel” remixed by Sled-E & Hybrid Heights, and The Night Owl, also known as Matt Johnson of Boston’s Nightriders. Others contributing to Transitions include Ganga, Vanessa Daou and Allies for Everyone. Grab your free copy at www.nerdyframes.org

A PSYCH TRIBUTE TO THE DOORS
Los Angeles-based Cleopatra Records has released a various artists’ compilation featuring the music of The Doors as reimagined by psychedelic rock bands such as The Raveonettes, Dead Meadow, Vietnam and Psychic Ills. A Psych Tribute to the Doors includes Elephant Stone reworking “L.A. Woman,” “Hello, I Love You” by Dark Horses, The Sons of Hippies putting their own mind-bending twist on “The Soft Parade” and a cover of the classic “Riders on the Storm” by Dead Skeletons. Also contributing are Camera, The Black Angels, Wall of Death, Clinic and Geri X.

STRYPER VIDEO CONTEST
Long-running Christian hard rock/metal band Stryper is having a video contest wherein fans are invited to submit a video for “Te Amo,” the current single off the band’s new No More Hell to Pay! album. Contestants need to go to www.stryper.com for contest details and to download “Te Amo” and a lyric sheet. Then, they must make and submit either a music or lyric video for the song. Ten semi-finalists will have their videos posted at Noisecreep.com, where fan voting will determine the winner. The prize package includes Stryper merchandise, guitar picks, drumsticks, an autographed copy of No More Hell to Pay! and a Skype session with singer/guitarist Michael Sweet. The winning video will also be published on Stryper’s YouTube channel and Stryper.com. Entries must be in by April 12.

HALF NOTES
THE IRREPRESSABLES have just released the second E.P. in their “Nude” series, Nude: Viscera. Chances are the band will be fully clothed when they play Molly Malones on March 21 and the House of Blues on March 22.

Cult, the new Hopeless Records release from BAYSIDE, is doing real good so far; the record debuted at No. 24 on Billboard’s Top 200 Albums chart and hit No. 1 on the LP Vinyl chart. You can hear for yourself when the band plays the House of Blues on March 21.

MARK McGUIRE is on the road touring behind Along the Way, his latest for Dead Oceans. He’ll also be playing the new music during his show at The Church on York in Highland Park on April 8.

Underground hard rock band THE SHRINE recorded its latest Bless Off in Venice Beach, and Tee Pee Records has released it on the world this week.

MR. LITTLE JEANS will release her new album, Pocketknife, on March 25 and play a record release show at the Bootleg Theater April 5.