Miles Teller Has Fun Being Bad in Divergent: The actor talks the film, Shailene Woodley & reveals his fears. 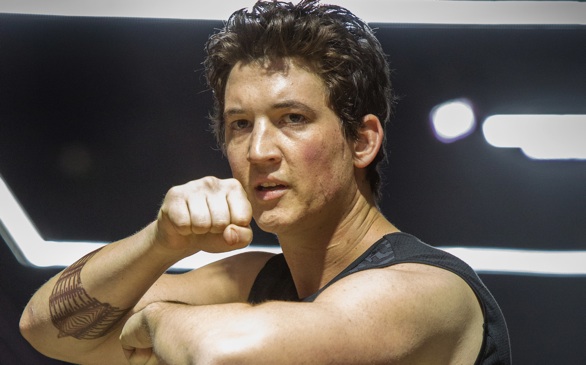 The first thing I noticed about Miles Teller was his impeccable taste in sushi. The tray outside his suite at the Four Seasons was covered in an array of rolls delicious enough to make his handler and I stare at it for a good few minutes, mouths agape and watering.

It's been a good year for Teller, and not just because of food. He has recently been attached to the Fantastic Four reboot due some time next year, and he previously starred in That Awkward Moment (with Michael B. Jordan and Zac Efron). Now, Teller is about to find success with Divergent, a film based on the popular book series of the same name by Veronica Roth.

Teller rejoins Shailene Woodley – who starred alongside him in 2013’s The Spectacular Now – in this story about a post-apocalyptic Chicago (my hometown). Here, kids are sorted into different factions based on their personal strengths. Playing the role of Peter, an ambitious recruit to the Dauntless faction that contains people who exemplify bravery, Teller is taking a step away from his generally comedic roles.

After tearing my eyes away from his room service, I sat down with the 27-year-old actor to talk about his upcoming film and what he thought about my hometown.

So you mentioned you have a group of fans called…
Peter’s Princesses, yeah. Well, I coined that phrase.

Oh, you made it up?
Yeah. We were in Phoenix or Dallas or something, and on Twitter I just said: “hey heading to Phoenix, looking forward to seeing all of Peter’s Princesses.” Just kind of throwing it out there, and it got some steam behind it, and when I showed up some of the girls had like signs saying, “I’m one of Peter’s Princesses” and all that. So, I thought it was pretty funny.

Before taking on the role and reading the script, had you read the book at all?
No.

What was it like reading the book with the character of Peter in mind after reading the script? And how did that shape your reading of it?
Well, at first I just read the script because it was offered to me—I didn’t have to audition. And I think the producers had seen Spectacular Now and thought it would be cool if I played this kind of, you know, bad character – like a villainous antagonist kind of role. And Shailene basically told me I have to do it.

So, I signed on just reading the script, and then when I read the book, I mean – it was great. There was a lot of stuff going on in the book that doesn’t have anything to do with Peter in the book, so I didn’t really care too much for that, you know? Like, I don’t really care about what’s going on with Four (Theo James) and Tris (Woodley), you know? I just don’t.

But no, I read the book, and I thought Veronica did a great job. And I’m glad that Peter lives.

If you could portray any character from any book, who would it be?
I’m going to go with Mowgli from The Jungle Book.

Why Mowgli?
I have an affinity for anyone who can survive in the wild. That’s kind of all the stuff I watch, like all the survival stuff. I just think that’s man at his most primal form, and I think it would be a lot of fun.

Have you ever tried to do anything like that?
No, I haven’t, but I would like to take like a survival course or something like that. It’s a lot. You've got to study, and you really need to get out there and learn all the stuff you can. But if I can get some fire-making techniques, build a little shelter, I think that’d be cool. It’s nice to watch it on TV, though, because you don’t have to actually do it, but I love it.

Shailene is into that as well?
She studies herbalism. And she’s studied a lot of this stuff since she was like 15, and she does have a pretty strong, active desire to make the world better – and knowing where we’re getting our food from, what we’re putting in our food and all that.

If you were injected with fear-serum, what do you think you’d see?
Maybe you see people that have been there your whole life, and they don’t recognize you. Maintaining friendships outside of college, once you kind of all spread out – it takes a lot of work, because it’s not like you just live down the street or anything. And it’s been a long time since I got to see some of my buddies from Florida. So, that would be a fear of mine.

And, I don’t know…cats with snake tails because I’m allergic to cats, and snakes kind of freak me out.

Maybe not being able to touch things. I’m very tactile. And my shoulder here, because I got in a car accident, so technically 2 percent of my body is paralyzed. I have a lot of nerve damage up through here. So, when I would get steroid shots, they would put the needle in, and I wouldn’t even feel it. Or even just losing any of my abilities, like losing my vision; that would be really scary.

I’m from Chicago, so I obviously have to ask all the Chicago-based questions. How was it filming there?
I dug the city. I went to school in New York, so that was my first experience with a big city like that. New York’s a bit different, a little less spread out and all that. But Chicago’s great. Man, I had the best steak of my life. Had a couple best steaks of my life. We went to Kingston Mine a couple times and had the best Chicago blues. [I] heard some of the best music I’ve ever heard.

But also, you get, like, four seasons in one day. Like snowing one minute, but then it gets all hot and windy, all this stuff. Because of the water, I guess.

And also, my parents and I rode our bikes around a lot, and apparently Chicago is the most accessible for a bike, like they put the most money in for a bike. It’s pretty cool.

Where was your favorite place to go in Chicago?
The Chicago Chop House. Also, we went to a couple concerts while we were there. We saw Bob Seger...[and] we saw the Stones twice.

Gotta ask this: What faction do you think you’d be in?
Dauntless. Though I think I’d be a Divergent.

Why?
I just think I’m pretty eclectic. When I was in high school, I was in jazz band, drama club, baseball, honor society, and my buddies and I threw all the parties…I was kind of just very well-rounded, so I think that’d be a part of it. I had a lot of groups of friends. Like, the guys I was doing plays with weren’t the ones I was throwing keg parties with.

So, is the theme of the book of “not fitting into one mold” something that resonated with you a lot?
It’s not something that I carry as a badge of honor or anything like that, but I think it’s a good thing for kids in high school who are being like cyber bullied and this, that and the other. I think Shailene’s character is a good role model for that because she’s a lead female heroine character that’s not bitchy. She’s not snarky; she’s just a true nice, caring, generous person who then kind of really toughens up and isn’t afraid to be who she is. That’s a really nice message for teenage boys and girls.

Did you find your character difficult to empathize with?
I tried to justify the whole knife in the eye thing, and I couldn’t really come up with anything. But at the end of the day, in the world they’re in, if you don’t survive, you are faction-less…everyone was trying to buddy up, this and that, but it’s every man for himself. And in my real life, I got tons of buddies and stuff, but Peter – he doesn’t really care. He’s very competitive, and I think he really envies Eric (Jai Courtney) and Four, and that leadership...that’s something he really latches onto. It was fun playing a character that didn’t really care too much what people thought about him.

That’s the part of him you really latched onto?
Yeah, well, it was just fun. I’ve done a lot of movies that are like comedy or whatever, and that shit can be exhausting...it’s a lot of fun, but at the end of the day, sometimes you just kind of want to do your own thing.

Interviews
Lily James and Sebastian Stan find a real relationship at the heart of 'Pam & Tommy'
168 views
Interviews
Ricky Gervais knew people would be mad about his new Netflix special. He did it anyway
783 views

Interviews
The star of Oscar-nominated 'Flee' gives his first interview: 'I wanted my story to be seen'
1,156 views

Interviews
'Crazy Rich Asians' made Henry Golding a star. Now he's showing Hollywood everything he can do
849 views