2 Killed at SXSW: 'The Most Horrific Thing I've Ever Seen' 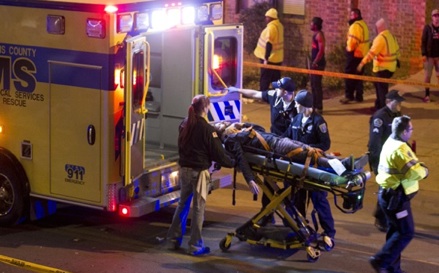 Bystanders react after several people were struck by a vehicle on Red River Street at SXSW.
(Credit: Jay Janner/Austin American-Statesman/MCT)

AUSTIN, Texas -- A speeding car drove into a packed crowd of pedestrians outside a downtown Austin nightclub during the SXSW music festival early Thursday morning, killing two bystanders and injuring 23.

The incident began shortly after midnight when a motorist being stopped on suspicion of driving while intoxicated sped away from police, broke through a barricade and headed the wrong way down a one-way street crowded with music revelers, police said.

The car slammed into a crowd standing near the Mohawk nightclub, striking two people on a motorized scooter, who were killed immediately, then hit a number of other bystanders. At least 10 people were taken to the hospital, five in critical condition.

Police hit the suspect with an electric stun gun, and he was taken into custody at the scene.

Jermaine Kilgore, public information officer for the Austin Police Department, told the Los Angeles Times that police initially tried to pull over the suspect several blocks away, near a gas station just off the interstate, and launched a pursuit when he refused to stop.

Kilgore said the identity of the suspect would likely be released at a media briefing scheduled at 10:30 a.m. in Austin. The man has not been formally charged, Kilgore said, but faces potential charges of capital murder, manslaughter and aggravated assault with a motor vehicle.

"We weren't in pursuit," Kilgore said. "We were behind the vehicle, and it happened very quickly. From the time the vehicle evaded [the traffic stop] and the time he crashed was about a minute and a half."

"There is only one person responsible for this, someone with no regard for the sanctity of life.," Austin Police Chief Art Acevedo told reporters in a hastily called briefing. "Our focus is on gathering evidence and seeking justice for the people who lost their lives."

The incident happened at the height of the evening's festivities during the South By Southwest festival, with a number of musical performances underway at clubs up and down the area near Red River Street and 10thStreet.

The street was instantly transformed into a scene of bloody mayhem, as emergency medical technicians rushed to aid the victims and police took the suspect into custody.

Jayda Luna, 21, said he was waiting in line hoping to score free tickets to see Tyler, the Creator when the car plowed through the crowd and slammed into the person standing next to Luna.

"I saw bodies fly into the air, and there was blood and it was unbelievable," said Luna, a junior at Texas State. "It was the most horrific thing I've ever seen in my entire life."

Luna said the impact was so great that it knocked the side mirror off the car and the man who was struck was thrown into Luna's girlfriend, 19-year-old Jasmine Rodriguez.

"We were inches from getting hit. Seriously, the car was right there," Luna said. "I didn't even have to extend my arm the whole way to touch that car, that's how close it was. It's a blessing we didn't get hit."

Luna, who lives in Austin, said the car seemingly came out of nowhere and was "going at a crazy speed."

"I don't know how anyone didn't hear it," he said. "We were right there and all of a sudden, boom, a car hit several people. It was going so fast."

"There was a guy a couple of feet away, he was hit and bleeding from his head. There was a guy behind me, I think his legs got hit," he said. "I was trying to comfort my girlfriend -- she was in tears, crying. I was trying to make her not look at it, but we had to walk through all the stuff to get to our car and there were bodies blocks away from the Mohawk."

Dozens are in shock and crying. It appears that they're are more than 3-4 people down outside of Mohawk. Crazy scene right now. #sxsw

Reese Williams, an Atlanta musician, said he was on a second-floor patio waiting for a show to begin when he was the car approaching at a high rate of speed.

"I'm looking down and I see this car screeching down the hill. The car comes down the hill, hits a left and busts a barricade. There was a cop car right behind it, it just goes down the street and smacks whoever was in the street. It was like something out of Grand Theft Auto," he said.

Williams estimated the street, closed to vehicle traffic, was filled with about 100 people. The police car, he said, was swerving to avoid pedestrians, but the suspect's vehicle plowed straight through and appeared to make no attempt to keep from hitting anyone.

The car continued several more blocks down the street. Williams said he was not able to see when it came to a halt, but the street outside the club was littered with injured people.

"This girl was in the street and they were trying to resuscitate her for like 10 minutes, she was bleeding out of her head--it was crazy," he said. "I walked down like two blocks and there were people scattered in the street. One was laying face down, his leg was off."

Friends and loved ones began cradling the injured and trying to comfort them until the ambulance arrived, he said. "It was crazy."

Colin Kerrigan, 25, was leaving an assignment at Stubb's BBQ, just down the street, moments after the accident occurred.

The freelance journalist raced over to Mohawk and found emergency rescue workers scrambling to help victims as police sirens blared and a helicopter circled overhead.

"As I'm walking up I see one person down and another person down and then I see more and more as I'm looking down Red River Street," Kerrigan said. "People on the sidewalks -- the people who witnessed the whole thing -- were crying and in shock.

It was a scene that I did not expect to see at SXSW. I know things get crazy, but nothing like a tragedy."

Kerrigan, who was attending SXSW from Philadelphia, quickly shot photos of the chaos and posted them on his Twitter account.

"I looked down and there's bodies," he said. "Some people were able to limp off to the side and other people were literally laying there not moving while people were keeping them calm. I walked farther down Red River to see what was happening and I saw bodies that were unattended and I believe they were part of the deceased, but I'm not 100% sure."