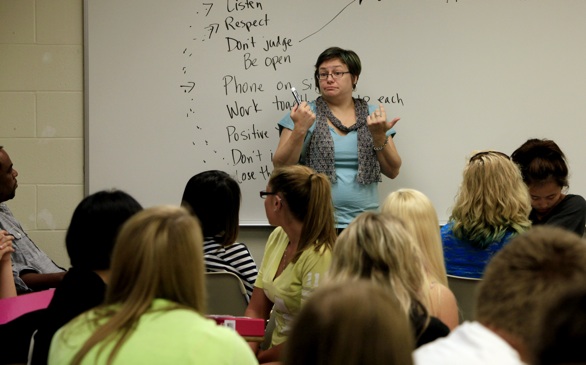 WASHINGTON — Several states are considering offering free tuition at community colleges, as the cost of a college education continues to climb and as high school diplomas no longer guarantee a living wage.

“Higher education for kids should not break families down” and result in a lifetime burden of debt, said Oregon state Sen. Mark Hass, a Democrat who sponsored legislation to study the viability of making tuition and fees at community colleges free to Oregon high school graduates.

In previous generations, Hass said, Oregonians could leave high school and easily find jobs in lumber mills, where they could earn a good living. But those days are gone, and jobs in auto garages, manufacturers and the service sector all require some technical training.

Hass said his bill also would help middle-class families whose children might attend community college for two years and then transfer to four-year colleges to save money.

Democratic Gov. John Kitzhaber signed the bill with some reservations. While he testified for the bill last month, he questioned whether the money would be better spent on the state’s need-based scholarships for two- and four-year schools.

Tennessee Gov. Bill Haslam, a Republican, is also pitching a plan to make tuition free at community colleges and colleges of applied technology.

The proposal is part of the governor’s “Drive to 55” initiative to increase the percentage of state residents with college degrees or advanced certificates from the current 32 percent to 55 percent by 2025. Haslam estimates the proposal would cost about $34 million a year, paid for by creating a new endowment from the state lottery’s reserve fund.

However, in 2007 a similar proposal by former Democratic Gov. Phil Bredesen failed in the Tennessee legislature. Moreover, the efforts in both Oregon and Tennessee come after a decade during which both states cut funding for higher education, contributing to tuition hikes.

In Mississippi, a bill for free tuition at community colleges died in committee last week because of funding concerns, but advocates hope the bill can be revived and passed next year.

Six of the state’s 15 community colleges already offer some form of tuition guarantee, meaning that after students have applied for financial aid from federal, state and other sources, county or private funding covers the remainder of the tuition cost, according to Kell Smith, a spokesman for the Mississippi Community College Board.

California suspended tuition at its public colleges in 1960 with its Master Plan for Higher Education. But under fiscal pressures, the community colleges have charged enrollment fees since 1984-85. Tuition and fees at California’s public colleges still remain the lowest in the country.

And in New York City, the City University of New York offered free tuition from 1970 to 1976, when the policy ended under the strain of the city’s fiscal crisis. Even so, between federal and state tuition assistance, nearly half of CUNY’s undergraduate students pay no tuition.

Advocates applaud the sentiment behind the idea of making tuition free at community colleges.

“I think these proposals come from a good place,” said Debbie Cochrane, research director at The Institute for College Access and Success, a nonprofit based in Oakland, Calif. “They come from concerns about making sure that college is affordable, and they come from a place that recognizes that postsecondary education is increasingly critical for today’s workforce.”

Still, Cochrane and others question whether free tuition is the most effective means to help the students who need it most, since students who don’t need financial assistance would also benefit from no-tuition policies.

Cochrane is concerned that such proposals don’t cover the other costs of going to college, such as textbooks, transportation and living expenses. Federal Pell grants already cover most, if not all, of the cost of tuition plus some living expenses for the neediest students.

In the current school year, Pell Grants, which students do not have to repay, provide up to $5,645 per year, typically for undergraduate degrees in two- or four-year colleges. In-state tuition at two-year state colleges in 2013-14 averaged $3,264, according to The College Board’s annual Trends in College Pricing report. But tuition and fees make up only 20 percent of the cost of attending community college, on average, the report said.

Sara Goldrick-Rab, a professor at the University of Wisconsin-Madison who has studied the impact of the college-for-all movement, said free tuition could also have unintended consequences.

“I’m glad to see them moving in this direction, but I want to push them to think harder about how they’re going to get students to complete and not just start (college),” Goldrick-Rab said.

While some postsecondary education might be better than none, Goldrick-Rab said that those who take on debt to attend college but never receive a degree are at high risk of defaulting on their debt.

Similarly, Paul Attewell, a professor at the City University of New York Graduate Center who studies the sociology of education, said state lawmakers should focus on where to spend state dollars to increase the number of students who actually graduate from college.

“It’s not obvious that in all circumstances, using public dollars to reduce tuition to zero is the best use of (public) funds,” Attewell said. “It may work out that if you reduce tuition, you’re essentially saving the Pell system money.”

Attewell said that in some cases, states might be better served by steering public dollars toward the cost of public transportation for students or increasing the number of counselors and advisers to help students make it through community college.