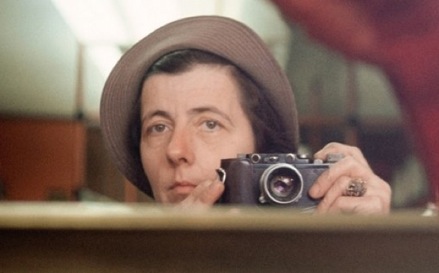 Who is Vivian Maier?
(Credit: Facebook.com/FindingVivianMaier)

She hides in the attic behind a shiny new padlock, ensuring her privacy. Blocking the window from view are her precariously towering piles of newspapers, only the most ghastly headlines meticulously cut and picked out. Her new employers downstairs know little to nothing about her—only that she can take care of their children when they work—and that’s enough for them.

But what they don’t know, and what the world wouldn’t know until after her death, was that she kept a secret that would have changed her life if the public got a sniff of it.

This woman, this recluse of a nanny meandering through her maze of news clippings, was a photographer—and a phenomenal one at that.

This is what John Maloof’s resolutely enthralling documentary Finding Vivian Maier is all about: uncovering this mystery woman who somehow kept the fact that she was a true artist, capturing the essence of street life in Chicago, the world and even herself, under wraps for the entire 84 years of her life.

Maloof, a historian and collector based in Chicago, found fortune when he picked up a collection of thousands of negatives and old belongings for a couple hundred bucks at a nearby auction. There was nothing to indicate these items were special—just another person’s things that may hold some interesting bits and pieces. He only found a name lightly marked on the boxes: Vivian Maier. The name meant absolutely nothing to him.

But the fact that her name meant nothing to Maloof became the most intriguing element when he started inspecting the negatives, realizing that they had deep, genuine artistic credence. There was no sign of her anywhere on the Internet except a recent obituary. With more than 100,000 negatives and 700 undeveloped rolls of film on his lap, Maloof realized there was a task at hand.

And so, he embarked on a long and arduous journey to discover who Vivian Maier was and why she isn’t up front and center in a MOMA gallery. Even genealogists admit that trying to find Vivian Maier or any of her family on the books was one of the hardest missions of their career. However, once Maloof found out that she had worked as a nanny for 40 years in Chicago, he began his journey down unexpected roads.

The testimonies of the children and families that Vivian Maier worked for is where Maloof’s doc really becomes a cinematic drama. It’s not the photography that these once-kids remember—although her outings never began without hanging her Rolleiflex around her neck—it was her personality.

Vivian Maier, you see, was a bit of a sociopathic Mary Poppins. While she cared for the children in some humanistic way, when it came to be a nurturing and warm presence, Ms. Maier always kept her distance, even at times wandering off with her camera in the darkest slums, leaving the children to fend for themselves. She wanted no connection.

When we hear accounts of her force-feeding and abusing some of her children and then learn that she is a photographic genius, we become quartered by judgment. We are in awe of her as an artist, frustrated that she refused recognition, but then we think that perhaps it was best she wasn’t in the public eye. Vivian Maier chose to stay away from any spotlight, even friendships, for a reason. Some acquaintances attribute mental illness, while others believe she was simply odd.

Regardless, Maloof took it upon himself to get Vivian Maier’s work recognized in the art world, which was no easy feat. But in a moment of guilt, Maloof doesn’t know if the making of his documentary or the discovery of her work was what Vivian Maier would have wanted...

Finding Vivian Maier explores that hesitation, while uncovering unarguably rich accounts of an artist’s life behind closed doors. Whether she wanted it or not, I sure am glad to have gotten a peek.